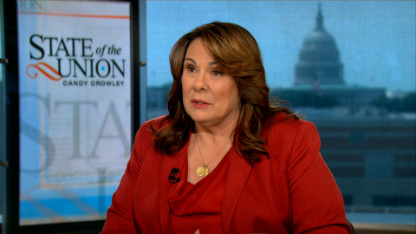 For the pending second presidential debate, the format agreement says that after each question from the audience and a two-minute response by each candidate, Barack Obama and Mitt Romney are expected to have an additional discussion facilitated by the moderator.  This year the Hofstra University town hall debate moderator will be Candy Crowley of CNN.   The language of the debate-format agreement means that Crowley’s participation is to be limited.

As the document states: “In managing the two-minute comment periods, the moderator will not rephrase the question or open a new topic … The moderator will not ask follow-up questions or comment on either the questions asked by the audience or the answers of the candidates during the debate or otherwise intervene in the debate except to acknowledge the questioners from the audience or enforce the time limits, and invite candidate comments during the two-minute response period.”

Yet Crowley’s take on her role is: 'I'm not a fly on the wall'.  It has been suggested that debate questions must be pre-submitted in order to allow Crowley to choose the questions.

Of course, coming from members of today’s openly biased media this is nothing new.

In 2008 Tom Brokaw of NBC News moderated a town-hall debate between Obama and John McCain. Brokaw redirected the topics, changed questions from the audience and asked too many of his own questions.   Brokaw defended his performance by citing that a debate commission official praised that debate as “good television.”

Good television?  Has the bar for debates between two people vying to be President of the United States of America been arbitrarily reduced by news media pundits to being “good television”?

So, when are the hosts of Survivor, American Idol, or Snookie and Kate plus eight going to declare their candidacy?  Should the briefcase brigade from Deal or No Deal be considered among the front runners for 2016?

Members of  today’s news media are so openly biased they would keep protecting and defending Obama while actively working for his re-election even if there was verifiably authentic video showing Obama burying Caylee Anthony’s body in the Florida swamp.

Having people of this ilk unilaterally changing their role in debate proceedings because it is “good television” is most certainly not in America’s best interests.

It is a suicide pact.

America is at an existential decision making point.  The 2012 presidential election will be a watershed moment in history.

not actively involved in the debate proceedings, then read by Crowley in the order she receives them.  She should be a professional, stick to the role assigned her and keep her two cents out of the debate.

“…the goal of the Obama-loving media is to rip him to shreds.  Doing her part Saturday was CNN's Candy Crowley who claimed some Republicans (unnamed, of course) think this ‘looks a little bit like some sort of ticket death wish.’”

The reason Romney won the first debate and is experiencing a major surge in popularity is it was the first time a large number of American voters were able to see Romney as he is, rather than the filtered version presented to the public by the “progressive” Party Pravda.

When watching the Hofstra debate proceedings, remember Crowley, like her fellow “progressives” in the media, is openly pulling for Obama.