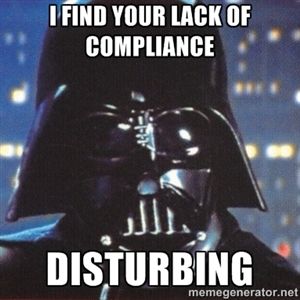 At any time the COVID Nazis can say “No vaccine for you” if there is a problem, like burned out workers, the government can’t be bothered fixing. No Vaccine For You!

NO! So sayeth the COVID-19 Nazis. At least not during the Christmas holidays. California is like other jurisdictions where everyone MUST take the vaccine in order to stop the spread of the most over-hyped thing since Justin Bieber came on the scene. If you don’t line up and get your shot, people will die and it will all be your fault. You, that’s right YOU, are causing people to die! So you have to get a shot and the consequences future navigation throughout society without a government issued “Vaccination Card” will be pretty well impossible.

So it was a surprise, or maybe not given the erratic state in which all levels of government operate, that vaccination centres closed down for the holidays. Despite the crisis that caused the elites to close the economy on the word of their WHO and UN masters, vaccinating people during the Christmas holidays was not important.

Geez, since the government can't give you a schedule of when you can get 'the shot' then maybe you have to wait until the 'Holy Fathers' can figure it out!  (good luck)  OBTW - "I'm from the governement and I'm here to help you"

It is also believed these obstructionist are taking end of the year hoildays, so America has to wait to die!

There are a few reasons, some of them speculative, as to why this “crisis” was deemed not to be important enough to continue throughout the holiday weekend. One theory is there simply was not enough vaccine ordered and received and the “pause” was to delay running out. Another one is people administering the vaccine were “burned out.”

Doctors and other health care workers were mad with several saying if staff shortages were the problem they would have gladly volunteered to work to help with the overloaded work demands. News Flash -> there is no shortage of people to give the shots; there was however a shortage of planning and organization needed to prepare the vaccine for the inoculations. Does America have enough qualified pharmacists to come in to prepare the vaccine? Or, extra help just isn't that important. All those burned out could have temporarily been replaced by qualified volunteers who would otherwise have not been working during the holiday weekend.

And many wonder why a lot of people don’t take COVID, said to be the greatest plague in 100 years, seriously.

The person in charge of the distribution of the vaccine is .......who? Having someone associated with the military running the operation just adds to the speculation of those who think martial law is either here or right around the corner. It would be one thing if Dr. Fauci was doing a good job but he obviously isn’t. Guess what, the virus didn’t take a break during Christmas, vaccinations should not have either.

Of course this helps the government in what appears to be the prime objective of scaring the population into submission, knowing the vaccinations could be slowed down or stopped on a whim. And of course there will people who will now insist if vaccination can be limited on Christmas Day, why weren’t they closed on Kwanzaa and Festivus?

Inoculating the dumb unwashed masses is obviously not that important to the government. And the closure of these centres is further proof COVID-19 is not as serious as we’re being told.

People who really want to get the shot should understand this. At any time the COVID Nazis can say “No vaccine for you” if there is a problem, like burned out workers, the government can’t be bothered fixing.