FOR IMMEDIATE PRESS RELEASE:
As seen on http://codyjudy.blogspot.com/2012/08/cody-robert-judys-us-supreme-court-case.html
and
http://teapartyorg.ning.com/profiles/blogs/cody-robert-judy-s-u-s-supreme-court-case-boosted-for-conference
Cody Robert Judy's U.S. Supreme Court Case Boosted for Conference
In David Weldon v. Obama http://www.supremecourt.gov/Search.aspx?FileName=/docketfiles/12-5.htm you'll notice it was docketed July 2nd, and now was scheduled for distribution of conference Aug 8th for Sept. 24th. That is 36 days in between the time it was docketed and the time a docket report was made Aug 8th of the distribution for conference.
My case Judy v. Obama  http://www.supremecourt.gov/Search.aspx?FileName=/docketfiles/12-5276.htm  My case was docketed July 17th and its been 44 days and it is still there has been no docketed date for it or when it is distributed for conference.
Now, according to Van Irions- Liberty Legal "Some have suggested that the Court’s failure to order the President to respond to LLF’s petition is a sign that the Court has already decided that it will deny our petition. Normally it is true that if the Court is interested in a case it will order the opposing side to file a response to the petition.However, because of the importance of this case it could be that the Court has decided to accept the case without needing to review a response from Mr. Obama. It is also possible that the Court has recognized that ordering a response could delay the case beyond the November election.
As we learned last June, it is very difficult to determine what the Supreme Court will do in any given situation. We are glad to know that we will have an answer before the end of next month."
Van Irions also has promised to file an Emergency Motion that the case be heard before the Nov. Election, but no record indicates it has been done. I filed my Emergency Motion and it was docketed as "Petitioner's Supplemental Brief" on the docket.
Of course I'm wondering what might be up. Logically, the court might have received more cases so that the ratio of time of docket to time of setting for conference is not kept. I thought I shouldn't be more then 14 days behind their case, but I'm also wondering if what Van Irions is saying is correct- and the Court was indeed forwarded my Emergency Brief and has looked at my case.
Understanding that Obama's lawyer also received my Emergency Brief and refused to answer, and because my Emergency Brief outlined time to respond and time to argue, that the Court would consider Obama's Team in default to ANY RESPONSE OR ORAL ARGUMENT, and thus simply rule on the merits of my case THAT they are free to make a decision on now anytime. I wonder if we could be actually that close and not even realize it?
This morning I called the United States Supreme Court Court case analyst assigned to me and inquired of the discrepancy and it was immediately rectified, in away that surprised me.
Not only was my case set for conference but it was set for the very first date available for conference after Summer Recess which was Sept 24th, 2012 and is the same day that Weldon v. Obama was set. 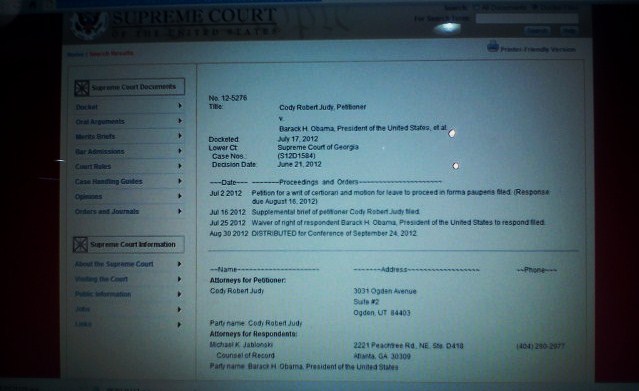 Now the interesting thing about this is the Court will consider all the Georgia Cases appealed at the same time. What they will find however is the normal dismissal for standing and cause of action upon which relief can be granted that thus far has been the BIGGEST factor in dismissing the cases does not exist in my case.
The other factor that must be considered now also is the IF Obama is made the Democratic Party nominee in the Sept 6th at the Democratic Party National Convention, Mitt Romney could conceivably contend Obama is NOT QUALIFIED as a Natural Born Citizen, and it would send the Democratic Party back to a state prior to the National Convention in which delegates would perhaps have to re-think their nomination or ultimately sacrifice the election to Mitt Romney entirely.
I am very pleased to have actually been boosted at least 2 weeks from my docketing date and to receive the Sept. 24th, 2012 conference date as of today, August 30th, 2012.
Please enjoy the latest commercials that the Campaign has put out.
1 Min Spot The Trial of Leadership- Obama's not a Natural Born Citizen
https://www.youtube.com/watch?v=CYPOJQRMovE
2- 30 Sec. Spot Birtherism American Exceptualism
https://www.youtube.com/watch?v=VBRTsoWeEO8
3- 30 Sec. Spot Mitt Romney Believes in America?
https://www.youtube.com/watch?v=J87kC83o6F4
Sincerely,
The Cody Robert Judy for President 2012 U.S.C. Eligibility Campaign
Cody Robert Judy
www.codyjudy.us
www.codyjudy.blogspot.com
YouTube: CODE4PRES
FEC REGISTERED  http://fec-candidates.findthedata.org/l/4426/Judy-Cody-Robert
Tags: court, cody, judy, robert, scotus, supreme, us, barack, birther, birthers
E-mail me when people leave their comments –
Follow