“ Chinese Dissident Chen, Welcome To The U.S. Of Hypocrisy “ 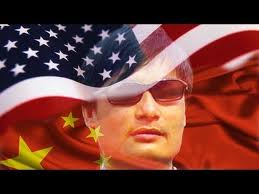