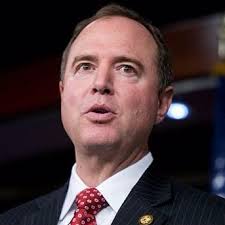 It appears Rep. Adam Schiff (D-CA) may be a wishful disbeliever of the world.  Both formal investigations have confirmed President Donald Trump is cleared; violated no collusion or crime with Russia involving the 2016 Presidential Election.

That is, it appears all participants have cleared President Trump except one; Rep. Adam Schiff (D-CA).  It appears Schiff acts as a lone attack dog for Speaker of the House, Nancy Pelosi.  Rep. Schiff’s versions as he expresses on TV are, somewhat contrary to the facts as found by both of the two investigations.

Evidence show that Candidate Hillary Clinton and her campaign may have participated in with Russia and their efforts to sway the 2016 Presidential Election.

Special Counsel Robert Mueller had 17 investigators; 13 hardened Democrats, 4 Unaffiliated, and -0- Republicans to investigate President Donald Trump and his alleged collusion with a Russia/Trump effort to swing the 2016 Presidential Election.

Mueller is a ‘registered’ Republican. Of the 17 other investigators, 9 of the 17 investigators made donations to Democrats; 6 donated to Hillary Clinton.  One contributed to Republicans.

After some 2 years investigating President Trump and his part in a Russia involvement of swaying the 2016 Presidential Election, ALL investigations now conclude there was and is NO COLLUSION AND NO CRIME.