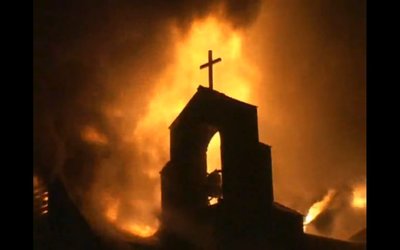 Burning Crosses, Bibles and Churches is NOT Hate Speech, if you are a Democrat! "They Are Just Peaceful Protesters Using Their First Amendment Rights"

- My Response: BULLSHIT! Hey Dems! What if someone where to burn down the DNC headquarters, will that be peaceful protest?

Bottom line: Democrats don’t just condone violence by continuing to look the other way, they are an active part of it Democrat-Run KKK Burnt Crosses, Democrat-Run BLM Burn Bibles. The mayhem in Portland where leftist rioters have been trying to destroy the federal courthouse for more than 65 days running, inadvertently gives us the biggest clue about who Black Lives Matter and Antifa members really are.

They are the George Soros bought-and- paid-for search and destroy arm of a Democrat Party well on its way to steal the 2020 Election with a universal MAIL-IN Vote. (CFP: More Frightening Than Covid-19: Dems Stealing 2020 Election Through Mail-In Vote)

Proof of who BLM and their anarchist sidekicks are came last night when they burned Bibles in downtown Portland.

‘How long has hatred of religion burned in the heart of the Democrat Party?

Where is the Democrat outrage about the burning of Bibles and American flags on this, the morning after?

“Leftists are showing their contempt for America and her virtue by burning Bibles and American flags outside the federal courthouse in Portland. The rioters have been attempting to destroy the federal courthouse on a nightly basis. But ever since federal law enforcement officers arrived to stop rioters from burning down the courthouse, the rioters have been starting smaller fires in order to burn other symbols of their derision. On Friday night, that included Bibles and the American flag. (Town Hall, Aug. 1, 2020) “The night before, rioters severed a pig’s head, put a police hat on it, placed the pig’s head on top of an American flag and then lit it all on fire.

“Portland police found an abandoned pig back in the early days of the riots. Police believe protesters planned to kill the animal and similarly use its body to make some sort of disgusting political message about hating cops.

Black Lives Matter doesn’t care about Black Lives or any other Human Lives, including aborted babies
“Deputies with the U.S. Marshals and officers with U.S. Customs and Border Protection, Homeland Security Investigations, and the Federal Protective Service have been working hard to protect the Hatfield Federal Courthouse in downtown Portland on a nightly basis.

“Oregon Democratic Gov. Kate Brown struck a deal with the Trump administration earlier this week, whereby federal officers will begin to withdrawal from downtown Portland as state agencies attempt to provide enforcement on their own. But Democratic leaders have consistently sided with the protestors, ignoring the violence and the threat and safety the riots pose to members of the community.

Did Democrats supply the rioters with Bibles to burn, or did the rioters steal them from their Grannies?

Did Democrats supply the rioters with a live pig to decapitate?

Is this really 2020, or some other uncivilized dark time from ancient history?

Black Lives Matter doesn’t care about Black Lives or any other Human Lives, including aborted babies.

BLM is not true to its cause—justice for the death of George Floyd, who by the way, identified as a Christian. 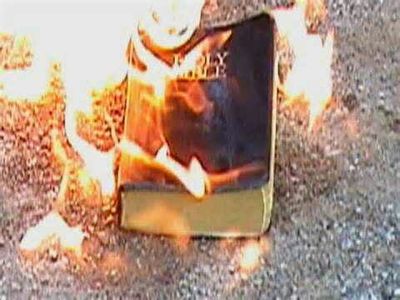 School teachers are said to be the driving force behind Antifa.

CLAIM: “Teachers are the number one occupation of the antifa terrorist organization according to the FBI.” (AP, July 9, 2020)

“AP’S ASSESSMENT: False. There is no evidence that teachers make up an outsized portion of antifa, a shorthand term for “anti-fascists.” The FBI told The Associated Press it “has not made any such statements about the occupations of people who are attracted to particular ideologies.”

THE FACTS: As early as November 2019, posts online have alleged that the FBI says the most common profession for an antifa activist to have is schoolteacher.”

Democrats don’t just condone violence by continuing to look the other way, they are an active part of it! Could this be why teachers don’t want children returned to school in September during the run of the Coronavirus threat?

Would Antifa teachers rather be rioting than teaching in the classroom, but getting paid all the same?

Bottom line: Democrats don’t just condone violence by continuing to look the other way, they are an active part of it.