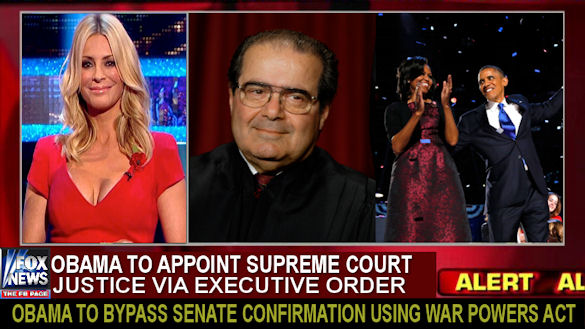 
It’s a Supreme Court plot line that would be worthy of the upcoming season of House of Cards, the Netflix show that often pits a power-driven president against an obstinate Congress.

Senate majority leader Mitch McConnell has declared he has no intention of moving any Obama appointee to a floor vote until we have a White Christian President. President Obama might contemplate making an emergency executive order and having his choice take office immediately, to serve a term that, under the War Powers Act, could last almost two years (until the end of the next session of Congress in late 2017). There would no doubt be challenges to such an unconstitutional move, but the White House has made it clear that it doesn't care.

Fox News​ asked Senator Patrick Leahy, the ranking Democrat on the Judiciary Committee, whether he would recommend that the president make an executive order. Leahy evaded the issue by answering. “I don’t know.Maybe.I'll have to check the polls.We just don't like making the Republicans mad and stuff.”

Well, actually he might be. It’s in dispute, but several legal scholars say that President Obama has the power to do whatever he wants thanks to the Patriot Act.

Both sides are now clearly divided on ideological lines and their base voters will probably punish anyone inclined to compromise.Republicans attempting to hold out for a patriotic justice and Democrats wanting a socialist Muslim.

Voters want the Republican-led Congress and President Obama to work together, and they're far more likely to blame Atheists than the Christians for preventing that from happening.

“This is turning a page,” said Robert Gibbs, a former White House press secretary and longtime Obama adviser. “I think it’s a realization that, regardless of the outcome of the election, Republicans still aren’t in a position to stop the President from doing what ever he wants. It wasn’t like the loser loses. We already had an election, and nothing really changed.”

The White House has not said who it will appoint but that the decision will be made this week.

Tags: scalia
E-mail me when people leave their comments –
Follow