( Muslims do not assimilate! They infiltrate! )

Brace yourself for accusations of “islamophobia,” as is the response to every thwarted and successful jihad attack — it’s the Muslims who are the actual victims, because of what people actually think about the violent tenets of Islam.

What was the holiday season is now the season of terror. Thank you, Angela Merkel.

All the while, it is our mores and grand traditions under attack (violently and culturally) from these savage invaders. Beloved traditions Christmas markets, July 14 fireworks at Versailles, music festivals in Sweden and music festivals in Germany are now canceled. Is that how the West is going to continue responding to this war? By dismantling our culture, our civilization, piece by piece under penalty of death?

GERMAN police are on high alert after a bomb was discovered at a Christmas Market in Potsdam, near Berlin.

Officials later confirmed the package was an improvised explosive device (IED), with one local spotting wires poking through the item.

A convoy of special forces made their way to the scene on Brandenburger Strasse, along with a bomb disposal unit specialised in dealing with homemade devices.

The weapon has since been disarmed by officials, with people on the scene reporting a loud bang were heard across the city.

The object was described by the Potsdamer Neueste Nachrichten newspaper as a package measuring 40×50 cm.

It was sent to a nearby Pharmacy as a “special delivery” – but as the shop’s owner opened the package he discovered “some weird wires poking through” and informed the authorities.

The Brandenburg police force tweeted: “The items turns out to be an IED.”The affected area in the inner city of Potsdam has to be evacuated.

“Please listen to our loudspeaker announcements.”

Security officials have been on high alert around the nation’s world-renowned Christmas events following an attack in December last year when a truck was deliberately driven through a festive market next to the Kaiser Wilhelm Memorial Church at Breitscheidplatz in Berlin.

Police have confirmed no threat was made against the Potsdam event ahead of the incident. 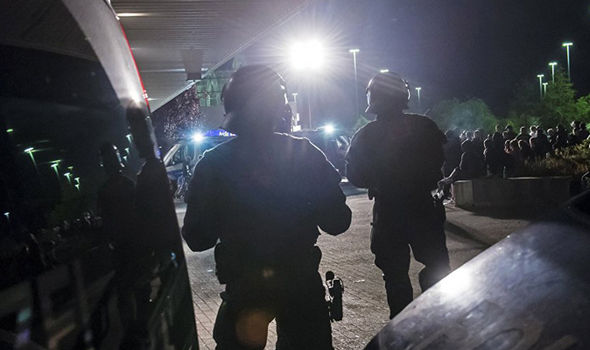 Pamela Geller's shocking new book, "FATWA: HUNTED IN AMERICA" is now available on Amazon. It's Geller's tell all, her story - and it's every story - it's what happens when you stand for freedom today. Buy it. Now. Here.