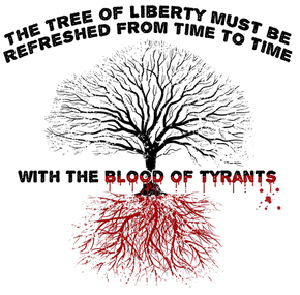 The tree of liberty has been waiting a long time, too long, for refreshment. And it is thirsty, it is nothing less than a thirsty tree!!

“The tree of liberty must be refreshed from time to time with the blood of patriots and tyrants.” —Thomas Jefferson, 3rd President of the United States, author of the Declaration of Independence

As I write this, We the People have stormed the US Capitol building and are inside it. The lame stream media is reacting with a pearl clutching swoon, and spineless Republican leaders are claiming “This is not who we are.”

If our so-called representatives won’t represent us, if they refuse to honor their oaths to protect and defend the US Constitution, then all bets are off. Everything is on the table – and you rotten, corrupt bought-off politicians had best beware. The tree of liberty has been waiting a long time, too long, for refreshment. And it is thirsty.