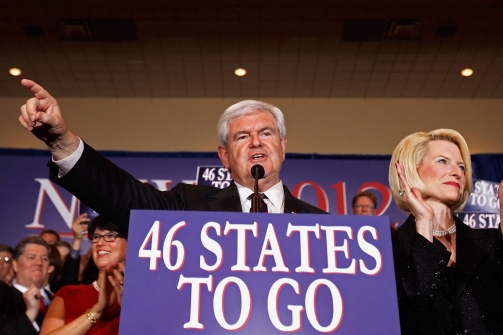 I attended Newt Gingrich's party at the Rosen Centre in Orlando last night. Over a hundred media outlets were there. Despite not winning Florida, the mood of Gingrich supporters was extremely upbeat; waving signs, “46 States To Go!” Gingrich's speech was awesome! He talked about overturning Obama's policies to which the crowd was elated. He did not mention Romney at all.

I never do this. However, as I surveyed the ballroom, I noticed I was one of only about ten blacks in attendance out of the hundreds at the party. Frustrated, I thought, “Where are the black people? And why have they not embraced our conservative message which I know in my heart is best for all Americans?”

Years of Liberalism and Obama's presidency has been devastating to the black community. http://securetheserights.net/?p=643

And yet, like zombies, blacks blindly continue to vote for “the problem” which is Liberalism intrenched in the Democratic Party rather than “the solution” which is Conservatism.

While I do not blame Conservatives for the lack of black faces at our events, I do feel Conservatives have a moral obligation to “spend some money” pursuing/educating blacks; break the false paradigm that the “democrats are their friends”.

In candid moments, some Conservatives say, “Why bother? Blacks are going to vote democrat...period. And besides, blacks are only 12% of the population.”

As I stated, we Conservatives have a moral obligation to liberate our fellow Americans who are black from the slavery of years of failed liberal democrat policies. It is simply the right thing to do.