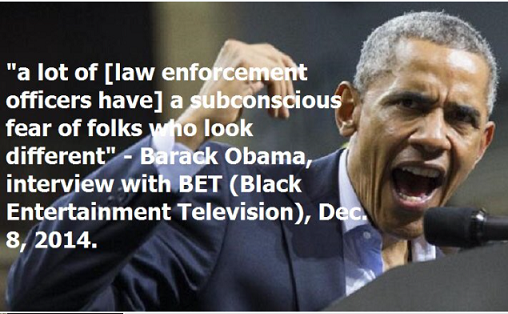 Before someone says President Obama did no such thing and that Baton Rouge, like Dallas, cannot be laid at his doorstep, let us consider his own statement that “words have consequences”. From Ferguson to Baltimore and beyond President Obama’s words have been the equivalent of yelling “fire” in a crowded theatre. He has encouraged a false narrative of racist cops and racist police departments whose officers are guilty until proven innocent, or buried, whichever comes first.

If there is a Pearl Harbor in this war on cops, it was Ferguson, Missouri, where President Obama’s Justice Department sent 40 FBI agents to prove Officer Darren Wilson was a racist murderer of an innocent black teen. He has made the race-baiting Al Sharpton, who helped create the myth of “hands up, don’t shoot”, a key adviser on race matters and Ferguson.....

Read more: http://www.americanthinker.com/articles/2016/07/baton_rouge_latest_battle_in_obamas_war_on_cops.html#ixzz4Embbw4RY
FolloDaniel John Sobieski is a freelance writer whose pieces have appeared in Investor’s Business Daily, Human Events, Reason Magazine and the Chicago Sun-Times among other publications.