Barack Obama and his Hatred for the Constitution!!

By Leon Puissegur on Freeedom Outpost

Barack Obama has done nearly all any good Marxist, Socialist, or Communist could do. From his chief advisor Valerie Jarrett to his Communist mentor Frank Marshall Davis, to his Marxist leanings in college to his discipleship at the feet of Saul Alinsky, Barack Obama is a mixture of these ideologies. This is really what the “sheeple” of the United States elected without really looking at who this man. Now, many wish they had never voted for him.

Our intent is to show what the Declaration of Independence stated and why it was written. Then, we’ll tie it to what Barack Obama has, and is currently doing. We are sure that many people have read the Declaration of Independence, but then again, that is if one makes the assumption that people really care anymore about the Constitution or what it meant to our nation! Let us first look at why this document was written as explained in the second paragraph of this document.

“We hold these truths to be self-evident, that all men are created equal, that they are endowed by their Creator with certain unalienable Rights, that among these are Life, Liberty and the pursuit of happiness.”

This has been corrupted in so many ways today. To witness what is going on today does not reflect upon what was written back in 1776.

First and foremost, here it is understood that all men are created equal, no one can deny this since every man, and woman was “created” in the same way, through inception in the womb. There is no mention of everyone, in their equality, are all entitled to what everyone else has, nor is there a claim that everyone is equal in their abilities.

Instead, “…they are endowed by their Creator with Certain and unalienable Rights…” We have to realize that in 1776 our nation was under the thumb of a King that forced people to live by his rules. These Rights, so described in the Declaration, were not free and did not include everything, as they seem to do today.

If you read the next few lines, you will see that it is clearly stated, “…that among these are Life, Liberty and the pursuit of Happiness.” It is the last one that rings a bell with us in that it is very clear that it is the “pursuit” of happiness, and not the “giving” of happiness! To many, this will not matter. They would feel that the first two show the last to be just a brief statement showing what “may” be accomplished.

Let us dissect the very first part of Life, Liberty and pursuit of Happiness. It is our right to Life, no one should deny this right. Yet, in the United States today, over 3,000 babies are murdered every day and their Right to Life is ignored.

Next comes Liberty. Yes, we can make a huge statement that the slaves were denied this right, but we have to go back and take a very deep look at why this was not considered in the writing of our Constitution. We can state here that had Thomas Jefferson, who owned slaves, had his way, he would have included “everyone” and left no one out. To that end, it was the decision of those from the New England States to not include slaves into this document. After all, they were making vast amounts of money on the slave trade through their ports in Boston, New York, Philadelphia, and other North ports of call. However, that is an entirely different story, although closely linked to this one.

Consider the last part of this very profound document, “..the pursuit of Happiness.” Once again, it is very clear that the word “pursuit of” which show a clear and concise definition of what the founding fathers were out to do. They made sure that everyone could “pursue” their dreams of happiness. It did not mean that happiness was an automatic gift or right would could claim.

Many will try to take this part of the article apart with all the changes over the years and how the Supreme Court decided many cases which now seem to be opposite of what was written in the Declaration of Independence. We must look back every now and then to see what was intended for “WE THE PEOPLE” in order to make sure those ideas are never destroyed. We began with the Declaration of Independence to consider what Barack Obama is doing now and how it compares to what King George did during the the time leading to the American War for Independence. The following words of this document make our explanation of what we state here simple.

“That to secure these rights, Governments are instituted among Men, deriving their just powers from the consent of the governed.”

Here we can finally make a huge comparison of what Obama is doing now that does not adhere or reflect the words of our founding fathers. Since 2010, we have seen what clearly seems to be wrong doing by Government officials that should never be allowed to happen without the “consent of the governed”! We are talking about the supposedly “phony” scandals of Obama, including Fast and Furious, Obamacare, Benghazi, IRS targeting, News reporter abuse, and NSA retrieving nearly all the information “WE THE PEOPLE” send out without a warrant. We could go on and on with these, but this demonstrates that maybe we should reflect back on the first document that declared our freedom from tyrants; a freedom we are now watching vanish before our eyes.

Today we have what is called the “Tea Party,” and these people just wish to bring to remembrance this part of our history. Yet, King George, sorry, Barack Obama does not wish to even listen to them. He calls them racists, terrorists and whatever he, and his minions wish to call them.

Tea Party people are nothing less than being Patriots of the Constitution and the history that has been laid down before us. Remember that statement from King George, sorry, Obama? “I have this thing called the Constitution that keeps getting in the way of what I want to do.”

That is a very true statement by a man whom took the Oath of office twice to, “…preserve, protect and defend the Constitution of the United States.” That oath is directly quoted from Article 2 Section 1, Paragraph 8 of the US Constitution.

Yet, for Barrack Hussein Obama, the Constitution is something that is seen as an obstacle; something in his way! This means that what Obama has planned for the United States is against the very Constitution he swore to “preserve, protect and defend.” Why would any president ever wish to violate the bounds of the Constitution if he did not have evil plans for the United States? This president is a known liar. He is a president whom can outtalk anyone, yet knows nothing about what the Constitution is, even though he lays claim that he is a “Constitutional” layer, of which brings forth even more questions since none of his college transcripts or most of his history is out there for anyone to read, only what very few of his classmates are willing to state.

If we delve into Article 1, Section 8, Paragraph 2, we see that President Obama has violated the very meaning of this part of our Constitution just by his actions alone with his healthcare rollout (fallout might be a more appropriate term). Whatever one may wish to call the failure, what Obama has done is not and never was intended to be allowed under the Constitution. Remember, it’s that Constitution that keeps him from doing what he wants to do, until now! This section of the Constitution shows just what Obama has single-handedly done to violate the very law he swore to defend!

It goes on from here to describe 17 items that Congress, and only Congress, can do. Yet, with Obama, it seems that this part of the Constitution does not apply to him!

Obama is involved in criminal behavior without even going on to the 17 other parts where he has decided to allow Obamacare to be hashed out among certain groups like the Unions and many others. How so? Congress voted and he signed into law an act that was supposed to be “uniform” in ideology. Instead, Obama just ignores his own socialist legislation and grants illegal waivers to a variety of people that the law does not allow. But let us go to Item 2 of this Section;

“To regulate Commerce with foreign nations, and among the several States, and with the Indian Tribes.”

Obama has decided to “regulate Commerce” without Congress at all when he excluded the Unions and others from Obamacare.

Here’s the next direct violation of the Constitution under this section:

“To declare War, grant Letters of Marque and Reprisal, and to make Rules concerning Captures on Land and Water.”

All we have to do is go back to the way he assisted the rebels in Libya and Egypt to see how he “bypassed” Congress. Obama also, through his own negligence, allowed the IRS to target Tea Party and other conservative groups that opposed him. He did this in much the same way King George retaliated against his subjects that opposed him. Now how about the way that Obama is “abusing” the Environmental Protection Agency because he could not get Congress to go along with his climate control agenda? Or how about the way Obama now plans to totally circumvent Congress to do as he pleases?

Just when did the Constitution grant the president the right to make laws and regulations without the consent of the People via Congress? That never happened.

Alas, we also have to pose the very same question to members of Congress that seem to be humbled by this would be King. They just seem to sit on their butts while Obama just does what he wants without impunity! Maybe Congress should give up 1, no make that 10 months, of pay each time Obama decides to violate existing law or implement one on his own without the consent of the People.

We could go on with the list, but we feel that we have shown enough here to place President Obama not on the pedestal of freedom, but on the pedestal of Tyranny. That is not where we need to have him, especially since he just cannot live by the Constitution he swore under oath to defend. It seems we have gone way over our allotted 140 characters, but if anyone would pay attention to more than that, maybe our nation would not be on the brink of total Failure!!

Obama is NOT our king although he thinks he is!! Obama is a PATHOLOGICAL LIAR, MURDERER, THIEF!! Obama is DESTROYING our CONSTITUTION and BILL OF RIGHTS!! WE THE PEOPLE Need to FIGHT for our FREEDOMS NOW!! DO NOT TRUST Obama at all, he is a Deceiver and is a DEVOUT Evil Islamic Muslim!! Obama is GUILTY of TREASON and TYRANNY for AIDING and ABETTING our ENEMY the Evil Islamic Muslim Brotherhood!! Obama Praises a WRONG god named allah and a FALSE prophet named muhammad!! The Koran ( Qu’ran ) is NOT a holy book, it is a book from Satan ( the devil ) to Deceive everyone!! Obama and his Brother Malik Obama are Both Members of our ENEMY the Muslim Brotherhood!! 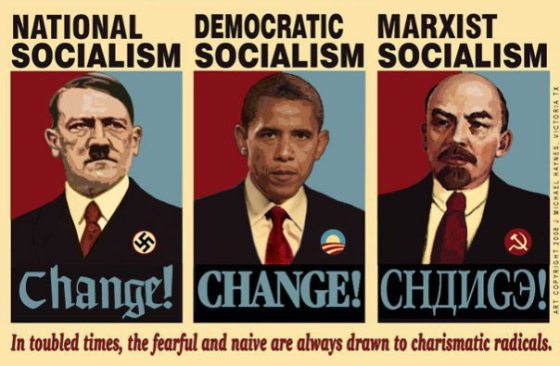 ( SOCIALISM DID WORK in HISTORY!! )