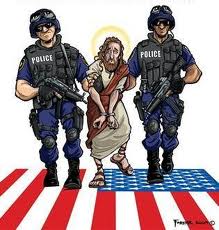 I do hope and pray that any “civil war” is avoided. Those of us who recognize Jesus Christ as the ultimate authority(not man nor religion) see clearly what is occurring and the consequences to our nation for not removing those who elect these bad men and women. No matter how many times the American people elect to government men and women that hold to bad vices and partake in immoral behavior, God will not be like those American's who willingly partake in electing in office or refusing to remove evil. He will not tolerate very much longer the evil people who rejoice in or don't partake in their Biblical duties in removing such wicked people. Judgment has already begun and the fruit of participating in or refusing to remove all evil has begun. Leaving what our American Founding Fathers gave us; Godly and Natural law, has resulted in the Government continuing in oppressing us, steal our children, destroying our families, destroying our Constitution, rape our children with sex education, with unnecessary “vaccinations”, use and abuse of psychotropic medications, sending police to arrest or threaten to murder us, and much, much more action in the way of evil upon us as well. Evil is allowed, so how much more spitting in Jesus' face will you partake ? The Government has trained our own police and military to hate you and they will kill you and violate what is left of your so called “Constitutional rights” the longer evil is tolerated and people enjoy their spitting in Jesus' face. How much travesty are you willing to tolerate by continuing in evil and or your electing/re-electing your own man made political “god's” ? Right now, judges mostly honor what the police do to you because you are considered a slave to them and they will not help those involved in. Expect little to no relief nor help from them http://youtu.be/vnJBW49afzg. You are after all, only a corporate number and they and the devil own you because you have rejected Jesus and He has had enough of being spit upon(God keeps His promises, please no false gospel jesus butterfly believer comments here).
As if corrupt judges, cops, lawyers, legislators, government elected officials and like minded citizens who elect them continue in their endeavor to destroy this nation instead of repenting, there is no more United States Of America---I guarantee that, for the Christian Bible says so. God has warned the people of this nation over and over and now those who sell their souls, as a prostitute sells her/his body, there is already a sickness and disease upon our land that cannot be cured without the total 100% heart repentance both individually and corporately as a nation to God for that cure. What to expect without true repentance to Jesus Christ will only get our nation more of the worsening of oppression from our national, state and local leaders utilizing their evil cops and “law enforcement” as well as eventual military involvement in our daily lives. In addition, expect more wild fires, floods, tornadoes, hurricanes, incurable diseases in proof of what George Mason, the Father of the Bill of Rights declared more than 200 hundred years ago;
“As nations cannot be rewarded or punished in the next world,
so they must be in this. By an inevitable chain of causes and effects,
Providence punishes national sins by natural calamities.”
My advice to all Americans, everywhere; stop messing around with religion and party politics---get on your knees and repent right now for any evil you're involved in to Jesus and remove immediately all those who continue to spit in the face of Jesus Christ. We cannot afford to waste time on more foolish debates, senseless theological discussions and or waiting for a consensus from foolish people who only want to believe what they want to believe.
For more specific details on how to remove evil, please visit;http://blackroberegimentpastor.blogspot.com/2010/12/removing-evil-through-p-process.html
Pastor Paul Waldmiller~Black Robe Regiment Pastor
E-mail me when people leave their comments –
Follow