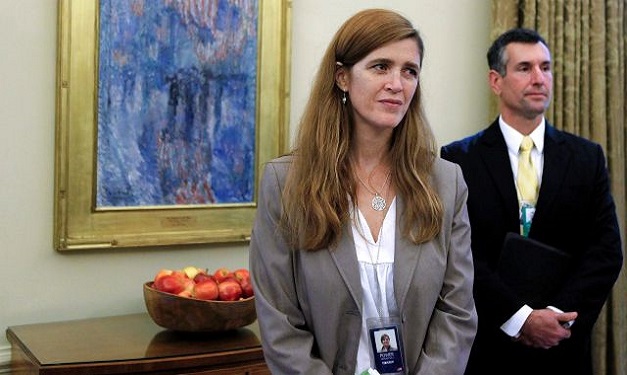 And the hits just keep on comin’…

Well this is really good news... for Iran. Also Hamas. And really bad news for the 99 percent of Americans who oppose invading Israel.

President Barack Hussein Obama has named former aide Samantha Power as the U.S. ambassador to the United Nations. Power will replace Susan Rice, who will take over as Obama’s national security adviser.

If you thought Susan Rice was bad, just wait till you get a load of Samantha Power.

The chair of President Obama’s new Atrocities Prevention Board once called for the United States to force troops into Israeli-controlled territory in order to end abuses she said were being committed by both sides in the Palestinian-Israeli conflict.

Having placed Israel’s leader on par with Yasser Arafat, she called for massive military intervention on behalf of the Palestinians, to impose a solution in defiance of Israel and its American supporters. Billions of dollars would be shifted from Israel’s security to the upkeep of a “mammoth protection force” and a Palestinian state—all in the name of our “principles.”

In the video at the link below, Samantha Power calls for the U.S. to provide "..billions of dollars to the Palestinian Authority for a military and state of the art defense system, and then assist them at invading Israel"