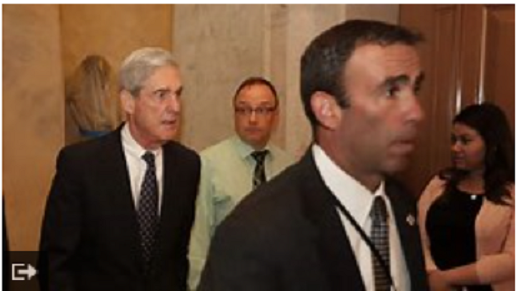 How objective can an investigation into Hillary Clinton’s email investigation be when the FBI agent who played a lead role was removed from it this summer for texting his pro-Hilary and anti-Trump sympathies?  And why does House Intelligence committee Chairman Devin Nunes have to read about it in the New York Times and the Washington Post? As Byron York reports in the Washington Examiner:

House Intelligence Committee chairman Devin Nunes has issued an angry demand to the FBI and Department of Justice to explain why they kept the committee in the dark over the reason Special Counsel Robert Mueller kicked a key supervising FBI agent off the Trump-Russia investigation.

Stories in both the Washington Post and New York Times on Saturday reported that Peter Strzok, who played a key role in the original FBI investigation into the Trump-Russia matter, and then a key role in Mueller's investigation, and who earlier had played an equally critical role in the FBI's Hillary Clinton email investigation, was reassigned out of the Mueller office because of anti-Trump texts he exchanged with a top FBI lawyer, Lisa Page, with whom Strzok was having an extramarital affair. Strzok was transferred to the FBI's human resources office — an obvious demotion -- in July.

Are we to believe that Strzok was diligently and impartially examining evidence related to Hillary Clinton and Donald Trump. Er, matters while being unable to contain his anti-Trump bias? Is he the only Hillary mole? Just look at Robert Mueller’s staff and James Comey’s exoneration of Hilary Clinton after the infamous tarmac meeting between AG Loretta Lynch and unindicted conspirator in Uranium One William Jefferson Clinton. Stop when  you detect a pattern.

This news comes as House Republicans, tired of leaks and finding out about things in the legacy media are moving to find both the FBI and the DOJ in contempt of Congress for failing to provide requested material:

U.S. House Republicans are moving to bring a Contempt of Congress resolution against Deputy Attorney General Rod Rosenstein and FBI Director Christopher Wray for stonewalling the production material related to the Russia-Trump probes and other matters.

According to Bloomberg, House Intelligence Chairman Devin Nunes and other Republicans decided to move against Rosenstein and Wray after the New York Times reported Saturday about the removal of a top FBI official assigned to Special Counsel Robert Mueller’s probe of the alleged Russia-Trump election collusion had been removed from the investigation.

If its hurtful to Team Trump, it gets leaked. If its damaging to Team Hillary, its treated like the gold at Fort Knox. That’s not really surprising in a probe where Michael Flynn gets dinged for making false statements to the FBI, the same crime committed by famous Russian colluder Martha Stewart, but Hillary Clinton is not. But then Hillary was never put another oath in an interview which was not conducted under oath and for which no notes were taken, unlike former FBI Director James Comey’s meeting with President Trump  Comey did not attend that meeting, nor was a grand jury convened.  And where are the Podesta indictments, pray tell?

Comey had the fix in for Hillary We now know why the FBI made the absurd claim that it would not release its files on the Hillary Clinton email investigation for alleged lack of public interest. The FBI was covering up its obstruction of justice in the, er, “matter” knowing full well that former Director James Comey had already exonerated Hillary Clinton before the alleged investigation was complete and all witnesses had been interviewed and months before Comey falsely claimed in his announcement that no competent prosecutor would take Hillary’s case.

In withholding the files sought under Freedom of Information Act requests, the FBI forgot that it and former Secretary of State Clinton are and were employees of the American taxpayer, taxpayers who have a right to know whether justice is being served or denied.  Claims that Hillary had privacy rights that trumped the public interest were absurd:

The FBI is declining to turn over files related to its investigation of former Secretary of State Hillary Clinton’s emails by arguing a lack of public interest in the matter.

Ty Clevenger, an attorney in New York City, filed a Freedom of Information Act (FOIA) request in March of 2016 asking for a variety of documents from the FBI and the Justice Department, including correspondence exchanged with Congress about the Clinton email investigation….

On Aug. 8, the FBI asked Clevenger to detail why the public would be interested.

Say what? ? Did it serve the public interest or James Comey’s interest when he publicly detailed all the reason Hillary Clinton should be criminally charged before saying lack of intent, a criteria which appears nowhere in the law, was the reason Comey was giving Hillary a gt out of jail free card, a judgment he did not have the authority o make? Didn’t his exoneration announcement violate Hillary’s alleged privacy rights by detailing the criminal violations of a subject that was not going to be charged?

If James Comey was seriously looking for evidence of intent he couldn’t have possibly taken a single step without tripping over it. Wasn’t having a private server that contained classified information, multiple devices that were later physically smashed, and using bleach bit to destroy 33,000 emails that were under subpoena sufficient evidence of intent?

Only a corrupt and complicit FBI director, acting as Hillary Clinton’s surrogate campaign manager, who months earlier had decided he would exonerate her, could ignore the damning evidence:

As FBI director last year, James Comey began writing drafts of a statement exonerating Hillary Clinton, even before all witnesses in the investigation — including Clinton herself — had been interviewed.

The Senate Judiciary Committee obtained the Comey memos as part of its investigation into his firing by President Trump, which occurred on May 9.The revelation that Comey had begun drafting memos of his exoneration statement comes from transcripts of interviews given last fall by two FBI officials.

James Rybicki, Comey’s chief of staff, and Trisha Anderson, the principal deputy general counsel of national security and cyberlaw at the FBI, gave the interviews as part of an investigation conducted by the Office of Special Counsel into the FBI’s handling of the Clinton email investigation.

In a July 5, 2016, press conference, Comey said that he would not be recommending charges against Clinton for mishandling classified information despite her use of a private email server as secretary of state.

While the transcripts of those interviews are heavily redacted, they indicate that Comey started working on an announcement clearing Clinton in April or May of last year, before the FBI interviewed 17 witnesses in the case, including Clinton and some of her top aides.

Having already deciding he would exonerate her regardless of the evidence explains why he did not attended the Jult 2, 2016 interview of Hillary Clinton, did not put her under oath, or ever impaneled a grand jury in, there’s that word again, mater. The fix was in.

Yes, Virginia, this is a witch hunt. Robert Mueller III was appointed special counsel after his friend, the vindictive James Comey, committed a federal crime by leaking a memo which was a government record to the press. Mueller has picked staff and prosecutors as if he were stocking Hillary Clinton’s Department of Justice. He has picked a bevy of Clinton donors, an attorney who worked for the Clinton Foundation, a former Watergate assistant prosecutor, and evn a senior advise to Eric Hiolder. Objective professionals all (snarkiness intended ).

The facts and the lack of an actual crime will not stop Robert Mueller. Robert Mueller is following in the proud tradition of Stalin’s chief of the secret police, Laverentiy Beria. Just show him the man, or woman, and he will show you the crime.

And then there’s Hillary mole Deputy FBI Director Andrew McCabe. McCabe was in a key position overseeing the investigation of Hillary Clinton’s scandalous and treasonous handling of classified emails on her private server, a position from which he could assist FBI Director James Comey in putting the fix in. As Judicial Watch notes:

Judicial Watch today released Justice Department records showing that FBI Deputy Director Andrew McCabe did not recuse himself from the investigation into former Secretary of State Hillary Clinton’s unsecure, non-government email server until Tuesday, November 1, 2016, one week prior to the presidential election. The Clinton email probe was codenamed “Midyear Exam.”

While at [Washington Field Office] did Mr. McCabe provide assistance to the Clinton investigation?

After the referral was made, FBI Headquarters asked the Washington Field Office for personnel to conduct a special investigation. McCabe was serving as [Assistant Director] and provided personnel resources. However, he was not told what the investigation was about. In February 2016 McCabe became Deputy Director and began overseeing the Clinton investigation.

The Overview also shows if asked whether McCabe played any role in his wife’s campaign, the scripted response was: “No. Then-[Assistant Director] McCabe played no role, attended no events and did not participate in fundraising or support of any kind.”

Of course that statement was a lie.  The exposing of Agent Strzok is just another shoe dropping in the course of a  corrupt and criminal enterprise masquerading  as an investigation in which the FBI, the DOJ, and now the special counsel are all involved.

Lady justice is not blind here. She has been bound and gagged and held for ransom by Robert Mueller and his political cronies.

Daniel John Sobieski is a free lance writer whose pieces have appeared in Investor’s Business Daily, Human Events, Reason Magazine and the Chicago Sun-Times among other publication