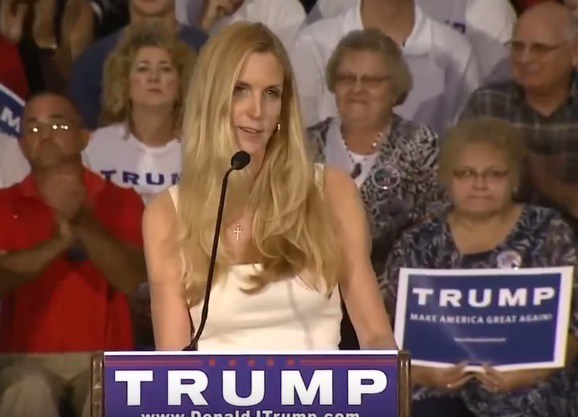 Ann Coulter’s got a crush and his name is The Donald. The Right’s queen of wit has fallen head over heels for Donald Trump, the candidate who forced the GOP to talk about the issue of illegal immigration.

My feelings about Coulter are mixed. I enjoy her columns and always buy her books when they come out, even if I don’t always agree with everything she says. She, like Trump, revels in shocking liberals, which goes a long way toward explaining the attraction. Admittedly, it’s not difficult to shock liberals, who take offense at things like colorblind hiring, the American flag, and virtue. I admire Coulter’s sass but I frequently question her judgement when it comes to picking political candidates. Over the years she’s endorsed Ron Paul, Chris Christie, and Mitt Romney; all duds in my book.

But never before has she been so enthusiastic about a candidate as she has been about Donald Trump because he speaks to the issue that she cares the most about—illegal immigration. It’s an issue that many Americans, particularly many conservative Republicans, care about. Until recently we have had no audience in Washington for our concerns. Neither party seems willing to crack down on rampant lawlessness and one party clearly encourages it by portraying the lawbreakers as victims. They told us that no one should have to “live in the shadows;” as if illegal immigrants weren’t boasting of their lawbreaking on television and being invited to the White House. Where are these “shadows” liberals are always talking about? They certainly can’t be found in our two hundred plus “sanctuary cities” where federal law is null and void.

Many of us thought that Washington would hear the cries of “enough is enough” when House Majority Leader Eric Cantor lost a primary to Dave Brat on account of Cantor’s go-along-to-get-along attitude toward illegal immigration. Apparently Washington didn’t hear us. I count myself among those Americans concerned with illegal immigration, and for that I will give Mr. Trump his rightful kudos. If he hadn’t run the other candidates would be talking about every other issue except that one. Even so, he’s a phony and a blowhard so he won’t get my vote in the primary or the general election.

Unfortunately, Ann Coulter has become a single issue pundit, focusing her attention for the better part of two years on illegal immigration. Her excellent book “Adios, America: The Left’s Plan to Turn Our Country Into a Third World Hellhole” is filled with startling facts about the Mexification (and Somalification, Hmongification) of America; but it also happens to be repetitive. It’s more of the same material she’s used in her columns since about 2014.

As someone who’s read “Adios, America” and most of her columns, I think I can summarize her views on illegal immigration, which I mostly agree with. According to Coulter, no other issue matters because if Democrats bring in poor immigrants by the boatload they will sweep to power and shape policy on everything including guns, crime, taxes, and the culture wars. As the saying goes, if immigrants and their children were destined to vote Republican even Harry Reid would join the Minutemen to defend our border. What motivates the Democrats is not compassion for the downtrodden but naked self-interest. Coulter explained her position in an interview with the Daily Signal’s Genevieve Wood: “It’s the only issue because once we have only Americans voting again we can win those other issues. If we keep dumping—and oh my gosh, if amnesty goes through well then it’s over overnight. As soon as they become voters, that’s 30 million voters for the Democrats.”

In the 2016 Republican primary Coulter has of course supported the candidate who forced the other candidates to take a stand on her pet issue. But I think Ann Coulter ought to temper her enthusiasm. Her position, if I understand it correctly, is that Trump has been consistent on the issue while the others are either amnesty shills (Bush and Kasich) or they only decided to get tough because Trump’s candidacy forced them to. As she wrote in her most recent column, “GOP Baffled as Voters Rally to Popular Candidate”: “Trump is the first presidential candidate in 50 years who might conceivably: (1) deport illegal aliens, (2) build a wall, (3) block Muslim immigration, (4) flout political correctness, (5) bring manufacturing home, and (6) end the GOP’s neurotic compulsion to start wars in some godforsaken part of the world…There is not another candidate who agrees with Trump on all these positions. Maybe one issue, but not all of them — and if it’s immigration, they would be lying.”

Maybe, but Trump would be lying too. Coulter appears not to know this, as she told Charles Cooke of National Review: “He has certainly been consistent on caring about illegal immigration.” Donald Trump has not been consistent on the issue of illegal immigration. He’s a flip-flopper, a fact that should surprise no one because Trump is the ultimate political chameleon. He’ll say whatever he has to say to secure power. In that regard he’s not unlike Barack Obama…with fewer scruples.

In 2013 Donald Trump met with some “DREAMers” (illegal aliens) and a pair of Democratic strategists at his penthouse in New York, even posing for pictures with them. They told him sob stories about parents being deported, a yarn I find very hard to believe because immigration enforcement is a joke and has been for a long time. There are no recordings of the meeting but the “DREAMers” all seem to agree that Trump was sympathetic to their cause. They say that Trump even claimed that “illegal aliens” (an accurate term that made them cringe) did landscaping for him at a golf course he owns in Miami. So the guy who employs illegal aliens—a crime in and of itself—is going to get tough on illegal immigration? Perhaps, but he’d be labeled a hypocrite if he did. And his critics would be right.

My theory is that Trump was considering a run for the White House but hadn’t yet decided which party would better serve him or which views he should pretend to hold. He doesn’t instinctively know these things because Trump has no core principles. Instead he has interests, and right now he believes that those interests are best served by focusing on this issue.

To Trump’s credit, and I don’t give him much, he has his finger on the pulse of America. He reasoned, not incorrectly, that people are sick of Obama and that he could ride the tidal wave of disgust all the way to the presidency. He zeroed in on this issue not because he gives a hoot (he doesn’t) but because he thinks that it will ultimately pay dividends, which it may. It’s just business; and Donald Trump is the consummate businessman; except for all the bankruptcies, of course.

What Ann Coulter doesn’t see is that Donald Trump fits the profile of the amnesty shill to a tee. Before he was a thorn in the side of the pro-amnesty GOP establishment he was part of that establishment; or at least he was fully qualified to be a member. He was a wealthy, secular, country club Republican who bragged of hiring illegal aliens for cripes sake! As many conservatives have argued, they can’t get the corporatist Republicans to enforce the law because they see illegal aliens as a source of cheap labor. Don’t forget that The Donald was one of those corporatist Republicans just two short years ago; and before that he was a Democrat who partied with the Clintons, praised Barack Obama, and donated to Planned Parenthood.

But surely Donald Trump will fulfill his campaign promise, right? If it suits him he will. He will of course be thinking of a second term and it might be difficult to get reelected if he angers the people who supported him the first time around, though the same could be said of a candidate like Ted Cruz, who is supposedly only jumping on Trump’s bandwagon. I would argue that Trump has jumped on Cruz’s bandwagon, a man who fought to defeat the Schumer-Rubio amnesty bill.

Or maybe Trump will flip-flop again. His calculations might be a little different after the election. As his multiple bankruptcies and divorces have proven, Donald Trump thinks nothing of going back on his word. If he believed that switching sides on this issue would pave the way to a second term he’d do it; and Ann Coulter would be stiffed at the altar along with the rest of his fan club. This man has no soul.