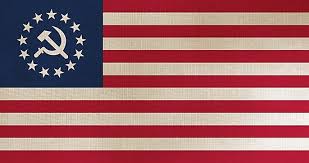 If the media doesn’t think America going into communism, is news—then what is?

Why is the Gang-Up Media Hiding Trump’s Warnings About America Heading Into Communism?
There seems to be a complete media blackout on Donald Trump’s rally in Arizona last night as of early this morning. Not a word of it on the ‘Net on this, the morning after.

America is running full speed ahead into Communism! Even more bizarre, nothing so far on the usually brimful of news Breitbart.

Looking online for anything Trump had to say from Phoenix last night would be akin to trying to find the proverbial needle in a haystack.

As MAGA leader Trump was not just in Arizona to talk about the 2020 Election being effectively rigged by the Democrats, he was there to warn us how America is running full speed ahead into Communism.

His rallying cry last night follows his repeated warnings of many days ahead:

“President Trump has put the mainstream media on blast and has accused Democrats of leading America towards communism. On Tuesday, Trump was interviewed on the Michael Savage Show, where he blasted the media for protecting Joe Biden and his fellow Democrats.

“Trump went on to criticize Biden for allowing illegal immigrants to flood into the U.S., leading to a crime wave and COVID-19 infection surges in border states. The 45th president also discussed election integrity and the importance of securing U.S. elections against fraud.

“He said back in 2016 he was able to catch the establishment off guard, but in 2020 they were ready for him. President Trump did not confirm if he would be running again in 2024, however, he did say his supporters would be happy when he makes his announcement.

“Trump said under Biden the U.S. is trending toward a level of leftism never before seen in its’ history.

Trump was warning about America’s path to communism even before the last election: Biden is “too scared to stand up to the radical left of his own party”

“President Donald Trump said the U.S. is at risk of communism in November.

“Trump frequently says the U.S. is at risk of sliding into socialism if the Democrats win the election. But he ratcheted up the threat level Monday, saying the country would face the peril of communism under a Biden presidency.

“The choice in November is going to be very simple,” Trump said at a rally in Dayton, Ohio. “There’s never been a time where there’s such a difference. One is probably communism, I don’t know. They keep saying socialism, I think they’ve gone over that one. That one’s passed already.”

“Trump has often charged that the Democratic Party is in the grip of “radicals” such as Senator Bernie Sanders of Vermont, a self-described democratic socialist, and he has accused New York Representative Alexandria Ocasio-Cortez of being part of a “bunch of communists.” But his suggestion that the U.S. is in danger of becoming a communist country could indicate a more extreme line of attack against Biden.

“The former vice president, Trump said, is “too scared to stand up to the radical left of his own party” and would bring about a “depression” if elected.

In his repeated sounding the alarm about America sliding into full-out Communism, Trump’s a modern day John the Baptist crying out from a media desert.

Meanwhile, that the media patently ignores Trump’s call to save America from communism is proof positive that the media doesn’t care about their own country.

If the media doesn’t think that America going into communism, is news—then what is?