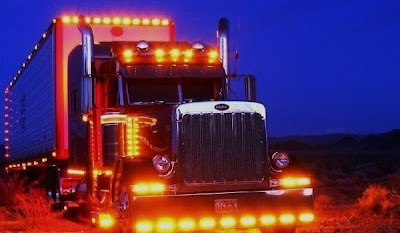 The gears of America are shifting towards Birthers like the 18 Wheeler approaching the downgrade decline where brakes are of no more use and you can palatably smell and see the smoke rising from the wheels. When your knuckles on the steering wheel clinching become white and your heart is pounding at the corner coming up in the wonder of the hairpin turn that you hope you’ve slowed down enough to make without peeling your load off the road completely.

The roar of the diesel engine grinds down low screaming loud in protest but you know it’s the only way of making the road ahead safely and so you’re buckled up prepared as any for the truth of the Birther corner to unfurl as America begins to connect the dots that reveal the most nefarious fraud perpetrated upon the American Republic for which we stand.

Rush Limbaugh’s voice has cracked this week like the whip across America calling the commander-in-thief by his reality show famed name -“Barry Soetoro” - announcing to all of quit-wit an emperor with no clothes on and the haunting facts of the fraud.

Glenn Beck, in the days of 2008 Gov. Sarah Palin and Sen. (McNasty) McCain’s campaign once a “Republican Party Dandy”, this week resembled the tearful Pastor confessing to a world-wide audience in humble recognition of the power of truth that we just can’t pick and choose what parts of the Constitution we’re going to uphold and which parts we’re going to ignore.

Beck even went so far as to hold R -Rep. Michele Bachmann’s feet to the fire when she defended the NSA’s intrusion upon American’s privacy and the morphed mentality that security trumps freedom summed up as, “If you’re not doing anything wrong you shouldn’t be worried about the Government in bed and in the bathroom with you, just like prisoners are treated”. [Post script 8-11-13: John McCain's just mad anyone knows anything except him confirming however younger Americans' don't trust their own government]

The Birthers have been fighting for freedom and liberty all across America all along. Glenn Beck stated in so many words, independence and libertarian ideals have permeated the destroyed Republican Party based on its affair with neo-con progressivism Newt Gingrich idols himself as. It’s no secret that this basically allowed the Fraud-in-Chief to waltz into the White House without a thought of the qualifications of the Office of the President demanded in the United States Constitution.

The only ones left in the shadows of dark crevices are the U.S. Senators and U.S. House of Representatives trembling on the controls of election magnificence in debating the fear of the multitudes and the popularity contest which freaks them out every two years, in the discernment of which hot poker they prefer.

It is rather telling when the guy who thought up “The Patriot Act” which loosened the controls of the Judicial Branch upon the Executive Branch, stated in regards to the NSA’s invasion of America’s homes, bedrooms and bathrooms, that this is out of control and we shouldn’t be spying on our own people.

Now CNN is actually making a move for what they see as a ‘nitch’. The “nitch” is actually called journalism and is a move away from the solidarity of the White House, and towards “The People”. Imagine the concept? It's the capitalistic way shall we say?

Obama/Soetoro has long quit providing the dollars for the Media and while the stocks of the Media Moguls crash in the fight for dollars has ABC, NBC, and CBS scrimping on things like pencils and paper-clips, a new strategy has to be invented to survive.

The unique perspective actually is The United States Constitution!

Truth aims to destroy things like robbery and thievery. The American People don’t like invasions of their privacy and while Bush may have got a push for the New World Order, Obama is the spear-of-the-cheer towards ending the sovereignty of the United States by destroying the Constitution as a walking talking violation himself.

While Americans may have wondered why the United States Supreme Court justices refused to even hear arguments in Judy v. Obama 12-5276 in 2012 and 2013 ,a case that came up through the State Courts of New Hampshire and Georgia, that showed Obama’s long form birth certificate to be nothing more than a long form fabrication with over 2500 hundred hours of investigation by professional law enforcement agencies, the breaking news of the NSA’s involvement in spying on Americans has completely unveiled the mystery.

What Americans just barely found out was true, as far as being spyed on, has been entrenched in the mind of the Justices and elected officials long before 2008. American’s are reeling from the realization just the same way that Congress and the Justices across America have already gone through long since.

Ever wondered why no Birther Cases got any action in Georgia? Well, Georgia’s pussy-sport-port has been supported by Obama and is making news today. Glenn Beck was laughing at Obama’s gaffe claiming North & South Carolina and Georgia were part of the Gulf and this port had to be opened up. Glen and Stu were open mouthed in laughter as they debated the intelligence of perhaps opening the port up to the Gulf underneath the Continent from Georgia to Texas. They surmised “that’s probably what O was talking about” as the god-king whose smarter than all.

Connecting the dots is a little game where you connect the dots with lines and then start to see the answer to the mystery picture that hasn’t been seen or has been hidden by a lack of lines in the maze of dots. That is exactly what is happening now as America is informed that the NSA has indeed been spying on them and is collecting their data and info.

How do you feel about living under the same conditions that prisoners live under America?

The biggest problem with that is Elected Officials can easily be manipulated to say, “not investigate the occupier of the White House whose blatantly handed out to the Press in the White House Press core room a known fabrication of his identity. Why would such be necessary and even better how do you suppose O thought he was going to get away with it?