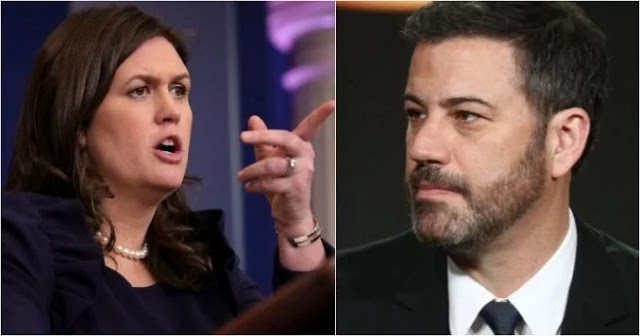 Jimmy Kimmel is in a lot of hot water today, and it all started when he decided to become a far leftist political pundit on his nightly talk show. Kimmel has been attacking President Donald Trump and anyone in his administration, but now, he has gone too far. The celebrity talk show host sexually harassed Sarah Huckabee Sanders on live TV, and just hours later, he woke up to a brutal surprise.
Jimmy Kimmel started to go off the rails when he decided to cozy up to Senator Chuck Schumer over President Donald Trump’s plan to end Obamacare. Kimmel’s huge mistake was becoming Schumer’s mouthpiece on the healthcare debate. We all remember Kimmel’s tearful appeal during his December 11th broadcast when he brought out his sick infant son as a propaganda piece.
What you may not know is Kimmel’s teary monologue was filled with downright lies about Trump’s tax cuts affecting healthcare, and all his misinformation came straight from Crying Chucky Schumer’s bag of dirty tricks. Ever since Kimmel has had a direct line to Schumer, and that’s how the once funny comedian turned into an obnoxious lying political hack, attacking President Trump on a nightly basis.
Well, Kimmel didn’t disappoint the Trump-haters on Wednesday night’s broadcast. White House press secretary Sarah Huckabee Sanders is now so hated by the left, she is their new target. Why? Trump’s press secretary has turned out to be a savvy, smart, and tough as nails opponent to the mainstream media, which she deals with daily. Oh, they try to trip her up, but she always comes back with one-liners that make them look like fools.
So, Sanders has been put on the Hollywood crowd’s “hit list.” She’s been personally attacked by Rosie O’Donnell numerous times. Cher also attacked Sanders’ looks and got a good smackdown by patriots, and now, we have Jimmy Kimmel, who just sexually harassed the White House press secretary on live TV.
The Daily Caller reports, “Late night talk show host Jimmy Kimmel mashed up fake news and orgasms in a joke about Sarah Huckabee Sanders Wednesday night. During a segment on ‘Jimmy Kimmel Live,’ the host made fake Valentine’s Day cards for various members of the Trump administration.”
For Sarah Sanders, he decided to “joke” about her sexually, saying that her card would read, “I like my orgasms like I like my news … Fake.” Wow, a far leftist male celebrity decides to sexually harass a woman on live TV under the guise that’s it’s a joke? Which part of the #MeToo movement did Jimmy Kimmel miss?
You may be thinking, “Well, it’s really disgusting, but is it sexual harassment?” The definition of sexual harassment is “harassment (typically of a woman) in a workplace, or other professional or social situation, involving the making of unwanted sexual advances or obscene remarks.” So, yes, Kimmel’s unwanted, obscene remarks in such a setting are sexual harassment.
Jimmy Kimmel woke-up to being lambasted on social media as Americans delivered a brutal surprise to the loser talk show host. “So in the middle of #metoo movement @jimmykimmel decides it’s ok to be a sexual bully by trying to embarrass Sarah Sanders, of course Kimmel gets a pass because he’s a Democrats & Sarah is President Trump Press Secretary! Liberal double standard on full display,” tweeted “CJ Reno.”
“Top Cat” let Jimmy have it, tweeting, “Kimmel is a typical Democrat sexual pervert/harrasser. He just uses his sexual predator supporting network to do his filthy deeds. Does anyone still watch?”
The rising hate from the Hollywood crowd for Sarah Sanders is so disgusting, yet she lets it roll off of her with ease in public. I can’t imagine what it would be like to be targeted by these leftist monsters on a daily basis. It must be her strongly rooted faith in God and her love of our country that keep her sane and focused on what matters. Her job is one of the toughest in the Washington, D.C., swamp.
The press secretary has become the darling of Trump supporters who are so grateful to have such a stellar voice speaking on behalf of the president. We all want her to know we have her back and will always defend her from these so-called celebrities who are vile, vulgar, vicious, and without honor. Sarah Sanders is out of Jimmy Kimmel’s league. She’d mop the floor with that two-bit huckster, and he’d never know what hit him.
E-mail me when people leave their comments –
Follow