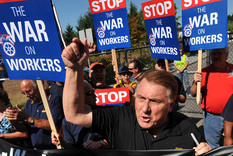 Top Teamsters goon James R. Hoffa is threatening to bring “civil war” to Michigan in order to roll back the state’s new right to work law.

After Gov. Rick Snyder (R) signed legislation aimed at breaking the labor movement’s death grip on Michigan’s near-comatose economy, Hoffa took to CNN Tuesday to declare, “This is just the first round of a battle that’s going to divide this state.” He added, “We’re going to have a civil war in this state.”

Hoffa also flippantly compared the enactment of the legislation to the attack on Pearl Harbor 71 years ago in which more than 3,000 Americans died.

While the Michigan House of Representatives debated the worker freedom bill on Tuesday, state lawmaker Douglas Geiss (D) took to the floor.

“There will be blood,” he said. “I really wish we had not gone here … I do not see solace, I do not see peace.”

In fact blood has already been spilled. While he was trying to interview right to work opponents outside the legislature in Lansing two days ago, conservative comedian-activist Steven Crowder was beaten up by union members. Apparently the perpetrators were upset that Crowder was asking questions and trying to prevent them from demolishing a temporary shelter that the good government group Americans for Prosperity had erected at the site. Crowder suffered a chipped tooth in the attack.

The new Michigan law strikes a powerful blow for freedom of association in the Wolverine State. Right to work laws weaken unions’ monopolistic control of local labor markets and protect workers’ ability to control their own destinies, free from pressure applied by union bosses. Such legislation allows employees to work without being forced to pay union dues which are often funneled to Democratic candidates and various radical causes. Michigan is now the 24th state to enact right to work legislation. Read more: http://frontpagemag.com/2012/matthew-vadum/unions-prepare-for-civil...

of 14 Next
This reply was deleted.
E-mail me when people leave their comments –
Follow