Is The Media Coordinating On Race Baiting? Ask John Harris and Politico

We should not forget that John Harris of the Politico, who asked the stupidest and most irrelevant questions of any moderator during the GOP Primary debates, is married to the former head of NARAL in Virginia.

We should not forget that Jonathan Allen of the Politico once worked for Debbie Wasserman Schultz.

We should not forget that Andy Barr of the Politico left the Politico to go work for the Democratic National Committee.

We should not forget any of this because I do not believe it is any accident that today the Politico has a big story from John Harris about race in the 2012 election.

The welfare attacks came up suddenly from the Romney campaign, which said little about the issue when Obama’s administration changed policy to let states seek waivers on the work requirements. The Romney welfare ads, which have been on heavily in battleground states, prominently feature Bill Clinton signing the welfare reform bill into law. The first ad in the series said that Obama moved “quietly” to “gut” the Clinton reforms so that now, “They just send you your welfare check. … Welfare-to-work goes back to being plain old welfare.”

The welfare ads — regardless of their racial intent — seemed designed to help Romney gain ground on Obama since many independent voters in key demographics, such as swing-state Catholics, tend to view government aid to the poor with suspicion, according to polling data.

Why not an accident that this story appears today?

It comes on the same day the Los Angeles Times runs a story that the GOP is trying to make an all white party look brown, NBC would not show any of the speeches from minorities at the RNC Convention on their website, BS-NBC ditched all minorities during their live coverage of the convention, and Chuck Todd, whose wife used to work for the Democratic Party, says the GOP is pushing a diversity card.

I wonder if any of these people have noticed that the Republican Party has more elected hispanic Congressmen and Governors than the Democrats?

It is far too much to be a coincidence that the Politico and NBC have ties, sometimes in the same bed, to Democrat and leftwing activists and then hop out of bed on the same page as the Democrats’ talking points.

The media TALK a good game when it comes to RACISM but the individuals that make up the media have a higher incidence and a more intense emotional RACISM than the national average.

what they got was a government habit with a roll of the dice.

`
Sarah Palin says Americans need to dump “the status quo” presidency of Barack Obama in order to free themselves from the “hope-ium” he’s been peddling since his 2008 campaign.
“Some of us had him pegged four years ago,” the former Alaska governor told Fox News’ Sean Hannity Monday. “Remember when he promised to fundamentally transform America? We knew right then during the campaign that we were in for a world of hurt under Obama’s failed, liberal, socialist policies and ideas that he would really ram down our throats.”
But the 2008 GOP vice presidential nominee told Hannity some folks just seem to be addicted to Obama’s brand of government and are unwilling to give up on him even when it seems obvious they should.
“We have opportunity to take it back, to turn things around,” Palin said. “And these people who still have that addiction to the hope-ium that he had promised — that hope-y, change-y stuff that was really bogus four years ago — well, they have about 71 days to open up their eyes and realize the path that he has put us on. It’s a path toward insolvency, it’s a path toward fewer freedoms, and really orchestrated chaos and bankruptcy.”
Palin, who has said she does not plan to attend the Republican convention in Tampa this week, spoke to Hannity from Arizona, where she was campaigning for Kirk Adams, a GOP state legislator now running for Congress.
Rumors floated at the convention suggested Palin might make a surprise visit to Tampa later in the week. But Palin gave no indication of plans for anything except making more campaign appearances on behalf of what she called "down ballot" Republican candidates running for Congress.
“These are important races,” she told Hannity. “Because . . . it doesn’t matter really who we’re going to be replacing the party in power with if we don’t really shake things up in Washington, D.C., and put government back on the side of the people.
“That’s what we're doing here in Arizona is campaigning for those who promised to do exactly that,” added Palin.
` 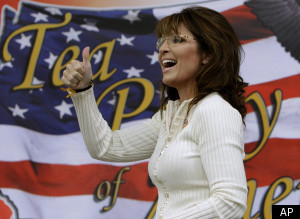