Senate Republicans voted today to block a measure that would have prevented individuals on the terror watch list from legally buying guns in the United States. 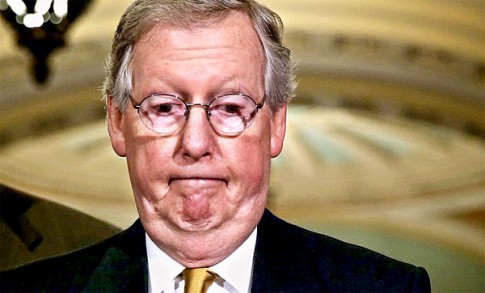 The first gun control measure proposed by Democrats was legislation from Sen. Dianne Feinstein (D-Calif.) that would deny people on a federal terrorism watch list the ability to purchase guns. The measure failed, 45-54. Sen. Heidi Heitkamp (D-N.D.) voted with Republicans to reject the measure, and Sen. Mark Kirk (R-Ill.) crossed over to vote in favor of the gun restrictions.

The second vote revived legislation from April 2013, written in the aftermath of the shooting deaths of 20 elementary school children in Newtown, Conn., with bipartisan backing that would enact universal background checks. The four Republicans who backed the bill then — Kirk and Sens. Susan Collins of Maine, John McCain of Arizona and Pat Toomey of Pennsylvania, who co-authored the measure with Sen. Joe Manchin (D-W.Va.) — also voted in favor of the Democrats’ plan on Thursday. Heitkamp also opposed the second gun-control measure, which was blocked on a 48-50 tally.

Senate Republicans have now laughably put themselves on record as supporting the right of suspected terrorists to legally buy guns in the United States.

After the vote, Democratic Leader Sen. Harry Reid (D-NV) hammered Republicans for being more afraid of the NRA than terrorists:

The American people want us to act on gun violence. Sadly today Republicans have proven that they are more afraid of the National Rifle Association than of FBI terror suspects buying assault weapons and explosives like those used in the Paris attacks and recent shootings in the United States.

As mass shootings rise and more innocent Americans die, Republicans showed the world that they are too scared of the NRA to take proven, common-sense steps to reduce gun violence. By doing the NRA’s bidding, Republicans ensured that FBI terror suspects – individuals deemed too dangerous to board an airplane – can continue to buy assault weapons here in the U.S. Republicans will have no one but themselves to blame if FBI terror suspects get their hands on the type of firearms we saw unleash horrific acts of violence on innocent people in San Bernardino, Colorado Springs, Newtown, Fort Hood, Charleston, and Paris.

Reid was right. Republicans are so terrified of the NRA that they won’t do anything to prevent innocent Americans from being slaughtered in mass shootings. Senate Majority Leader Sen. Mitch McConnell made a huge mistake with the Obamacare repeal bill, and Democrats are going to make Republicans pay for their pro-terrorist votes next November.

So.... Ben Carson is going around telling people he attacked people with hammers and knives, and what is this supposed to demonstrate his strength or what? Because that's not something I personally would be readily proud of, redemption stories of The Lord aside... And then, to top it off! Turns out he's lying?? Bragging about psychopathic acts he didn't commit! I don't know what's crazier, having done those things in the first place, or lying about doing them. He's sounds like a self-romanticizing narcissist is about all... STICK WITH TRUMP, the only hope for this country.