An Interview with Author Charly Gullett

Excerpts from the interview with my husband on his new book BEIRUT ARIZONA...you won't see this on Hannity tonight. AJ
=========

COVERT: The provisioning of cartels with weapons from the US has been informally characterized as an act of war against Mexico; do you agree?

GULLETT: No, I don't think it rises to that. But the ATF wasn't exactly acting in the role of peace-giver either. It is easy to see why some Mexican officials are calling this a violation of sovereignty and demanding that the individuals in the ATF/DEA/FBI, etc. responsible for the deaths of several Mexican officials, more than 150 police and probably hundreds of innocent Mexican citizens as a result of Operation Fast and Furious be turned over to the Government of Mexico for trial. Good luck on that. US Attorney General Eric Holder won't even give up documents to our own Congress.

COVERT: In your book (BEIRUT ARIZONA), you charge that an unholy alliance among renegade agents of our government, Mexican drug cartels and Islamic Jihadists in the Middle East exists and is aiding Mexican drug cartels. Why do you believe that the drug cartels would aid terrorists in physical attacks within the border of the United States, attacking their own customers?

GULLETT: I don't think this is any more complicated than the old adage "...the enemy of my enemy is my friend". In the end, I think the perception by American liberals of Mexican drug cartels as businessmen victimized by antiquated American drug laws, and the view that Islam is peaceful religion is entirely erroneous and we suffer the consequences of this psychological denial.

These are two competing criminal gangs composed of thugs; one secular, the other mystical but both are criminal organizations and if successful will eventually compete over the same turf. In the mean time, they work together in order to position themselves for this final reckoning. Like Nazi Germany and Fascist Italy during WWII, each believes themselves powerful enough to withstand the partnership.

COVERT: If your thesis is true regarding Hezbollah, do you think this nexus between cartels and Hezbollah, the arms trafficking are also an act of war against Mexico?

GULLETT: Absolutely. Hezbollah and the Mexican drug cartels are not just running a few guns or selling a few bags of dope to aging American hippies; these are enormous international criminal syndicates who are violating not only international drug and weapons trafficking laws but in the case of Islam are clearly intending on taking over the world and absorbing it into the new world caliphate so that "...Allah's religion is made victorious over all other religions..."

Read the entire interview  written by Chris Covert at: FreeFireZone
Read the introduction to the book at: WarfieldPress.com 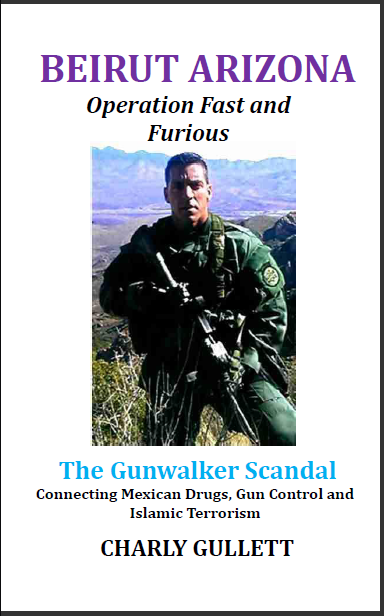