..PABLO – As plans march forward for a controversial copper and silver mine beneath the Cabinet Mountains Wilderness, members of the Confederated Salish and Kootenai Tribes are trying to halt the project by designating a sacred peak in the area to the National Register of Historic Places.

Francis Auld, cultural preservation officer for the Kootenai Tribe, said efforts are under way to recognize Chicago Peak under the National Historic Preservation Act as a traditional cultural property. The peak has long been associated with the cultural practices and spiritual beliefs of the Kootenai Tribe, whose members say the mountain deserves inclusion on the register before its cultural value is diminished.

Because the mountain sits on deposits of copper and silver that the proposed Rock Creek Mine north of Noxon would extract, tribal members say the timeliness of the nomination is critical.

“Chicago Peak is a very sacred site with many stories,” Auld said. “It is a place of sustenance and it is one of the last untouched places where the Kootenai can visit and reconnect with our cultural history. We don’t want to end up with a hollowed-out mountain.”

Revett Minerals president and chief executive officer John Shanahan said the company is aware of the peak’s cultural significance and is sensitive to the concerns of tribal members. But any surface disturbance caused by the mining operation will occur outside the designated wilderness boundary, he said, which is far removed from Chicago Peak.

“Designation or not, we have always been mindful of the area’s tribal heritage, and if there is a designation we will manage our project with that in mind,” he said.

Until the process is complete, however, Shanahan said he won’t know what measures, if any, the company might implement to mitigate adverse effects to the area.

The project has an estimated lifespan of 35 years and would entail the construction of roads, rail stations, pipelines, power lines, a tailings treatment plant and other industrial infrastructure. None of that infrastructure would infringe on Chicago Peak, Shanahan said.

But the growing chorus of concern for protecting the site was enough to initiate an assessment by the Kootenai National Forest. Even though eligibility for listing to the National Register of Historic Places may not save the mountain, Auld said it will go a long way toward corroborating Chicago Peak’s cultural significance, which has primarily been passed from generation to generation through oral histories.

Maria Nieves Zedeno, an archaeologist from the University of Arizona’s School of Anthropology and Bureau of Applied Research, is working as a consultant for the Kootenai Forest to document the cultural significance of Chicago Peak and determine whether it is eligible for listing. Zedeno has been conducting field research, interviewing tribal elders who understand the peak’s traditional uses, and reviewing archival and ethnographic histories of the tribe’s relationship to the region.

“Today and in recent history, the Kootenai have used Chicago Peak for seeking visions, acquiring knowledge and fasting,” Zedeno said. “Right now, Chicago Peak is regarded by the Kootenai as the principal place for vision quests, so any activity that obstructs the peak, inhibits access or compromises its cultural significance is of grave concern to the tribe.”

The Kootenai National Forest has an archaeologist to identify and assess the value of historically significant sites, but evaluating intangible values – such as the cultural and spiritual history of a sacred place like Chicago Peak – requires a different sort of expertise, Carl Davis, regional archaeologist for the U.S. Forest Service, said.

“Over the years, tribes have become frustrated because forest archaeologists are primarily concerned with the material values of historic sites, and miss out on important cultural values,” Davis said. “So our contractor, who works in this arena pretty extensively, will talk to the tribe about the historic fabric and community connection with Chicago Peak, and their long-term connection to the area.”

Zedeno has authored dozens of publications on the subject, including the 2009 book “The Archaeology of Meaningful Places.” Her work in Montana includes a study on the cultural significance of the Badger-Two Medicine area south of Glacier National Park. She also helped uncover an ancient buffalo jump on the Blackfeet Indian Reservation that is regarded as one of the best-preserved “drive-line” systems to date.

She said Chicago Peak has historically been associated with Kootenai cultural practices and beliefs that are rooted in the community’s history. If the tribe can demonstrate that Chicago Peak is important to maintaining the continuity of its traditional beliefs and practices, she said it may be eligible as a traditional cultural property.

But designation as a traditional cultural property does not necessarily preclude a project like the Rock Creek Mine from moving forward, or even add any restrictions. It does force landowners and agencies to identify and consider those cultural values and thresholds.

“It does carry some weight,” Davis said.

“The ultimate goal of the Preservation Act is to provide guidance to agencies on how to avoid adversely affecting a place to every degree possible,” Wilmoth said. “And to avoid adverse effects you have to identify what it is about that property that you are adversely affecting. It certainly helps if someone can walk up and say, ‘Hey, this looks like a religious structure. We should preserve it.’ But a tribal group can also make the argument that something is worth preserving because it has been used for spiritual purposes and is part of its historic tradition. It is harder to make that case, but it still happens.”

Auld believes protecting Chicago Peak is just as important to the preservation of cultural values as teaching the Kootenai language. He said if it’s determined that the Rock Creek Mine will not have an adverse impact to Chicago Peak, he hopes the tribe will receive some other form of cultural compensation.

“If I end up with a hollowed-out mountain, if I have to bend that far, I would like to have indefinite funding for cultural and language programs. It might not fill the void that the mining extract creates in the mountain but at least it helps the hearts and minds of younger generations,” he said. “We need to address the protection of our historical and cultural resources, now and into the future.”

Flathead Valley Bureau reporter Tristan Scott can be reached at (406) 730-1067 or at tscott@missoulian.com. 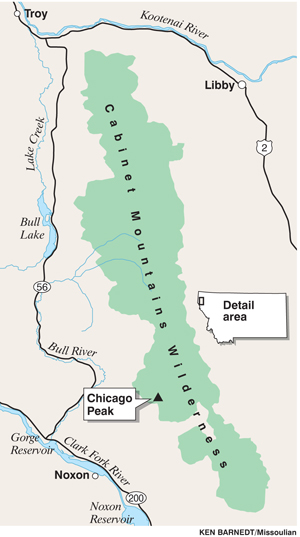