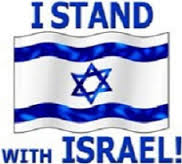 The Lord has placed it upon my heart to send out this timely and relevant teaching on “why” Christians MUST stand with Israel and the Jewish people because many Christians proclaim that the body of Christ must stand with Israel, however, for the most part; we do not even know the “why” behind the truth of this statement.

In this short teaching I will cover only a few reasons “why” we as believers in Jesus Christ MUST stand with Israel and the Jewish people. This teaching titled, “Why Christians Must Stand with Israel” can be accessed under the 2015 Prophetic Word on my website by clicking on the link below:

Also, I saw a post on Face Book this morning which raised some valid questions that said the following:

IMPORTANT QUESTION FOR ALL AMERICAN CHRISTIANS-

Can "God bless America" because of widespread abortion that murders millions of children annually?

Can "God bless America" because of widespread SIN and immorality, homosexuality, adultery, promiscuity, or pornography?

Can "God bless America" because of her destructive wars for hegemony and regime change in various places throughout the world?

Can "God bless America" for the rejection by many of SALVATION THROUGH JESUS CHRIST, and the frequent persecution of the Christians?

Can "God bless America" and her corrupt leaders who reject Jesus Christ for salvation?

No, you say? You say that JUDGMENT is coming to America from a Holy God because of all this?

When then WHY do you believe that God is under any obligation to automatically BLESS ISRAEL??? Because every sin and problem I just named, is also found IN ISRAEL and among the JEWISH PEOPLE there as well.

Be not deceived. A righteous and holy God is under no obligation to bless SIN and rebellion against His Holy word. Nor are we as Christians required by God ANYWHERE in His word, to uphold the sinful and the wicked who reject salvation through His Son Jesus Christ, and who furthermore persecute the righteous.

We are called to lead the wicked and the lost to salvation and to pray for them. But we are never called to aid the wicked and support those who reject His Son Jesus Christ. Get the FACTS, and reject false doctrines prevalent today, yet unscriptural.

To which I was led to reply…

Actually as the Day of the Lord approaches God will judge ALL the nations, even Israel, based on Jeremiah 25:15 which says “For thus says the LORD God of Israel to me: “Take this wine cup of fury from My hand, and cause ALL the nations, to whom I send you, to drink it.”

However, God will preserve Israel based on Jeremiah 46:27-28 which says, “But do not fear, O My servant Jacob, And do not be dismayed, O Israel! For behold, I WILL SAVE YOU FROM AFAR, And YOUR OFFSPRING FROM THE LAND OF THEIR CAPTIVITY; JACOB SHALL RETURN, HAVE REST AND BE AT EASE; No one shall make him afraid. Do not fear, O Jacob My servant,” says the LORD,
“For I am with you; For I will make a complete end of ALL the nations To which I have driven you, BUT I WILL NOT MAKE A COMPLETE END OF YOU. I will rightly correct you, For I will NOT LEAVE YOU WHOLLY UNPUNISHED.”

Unfortunately, as I witnessed by the responses on this particular post by many who profess to Christians, there are many evangelical Christians that are going against Israel and the Jewish people because of anti-Semitism, which is on the rise once again. And, some anti-Semitism from Christians may stem from the fact that some Jews reject Jesus Christ as being their Messiah.

Yet, while it is true that some of the Jewish people do not believe in Jesus Christ, one of the main reasons why this is the case is because based on Romans 11:1-24, God has spiritually blinded them on purpose due to their hardened hearts and unbelief, in order to offer salvation to the Gentiles (pagan, heathen people who are out of covenant with God) until the Fullness of the Gentiles comes to fruition which is fast approaching.

After the Fullness of the Gentiles reaches its zenith, which according to the leading missionary organizations is expected to come to fruition in 2015-2016, it will be then that God will remove the spiritual blindness off the Jewish people from the House of Judah so that all the remnant of Israel SHALL be saved based on the following Scriptures!

“But Israel shall be saved BY THE LORD With an everlasting salvation; You shall not be ashamed or disgraced Forever and ever.” ~ Isaiah 45:17 (NKJV)

“And it shall come to pass That whoever calls on the name of the Lord Shall be saved. For in Mount Zion and in Jerusalem there shall be deliverance, As the Lord has said, Among THE REMNANT whom the Lord calls.” ~ Joel 2:32 (NKJV)

Furthermore, please take the time to read this article below.

‘This is Evil': Obama plans to use United Nations to undercut Israel, force two-state solution

I agree with Glenn Beck on everything EXCEPT that we do NOT have 100 years left to look back on history! Also, they may think that they are messing with Netanyahu—BUT they are really messing with Yahweh, the God of Abraham, Isaac, and Jacob (Israel)! Watch and see what happens to NYC and the middle of the US along the New Madrid fault line when they succeed in dividing Jerusalem based on Zechariah 14:1-5 which says, "Behold, THE DAY OF THE LORD IS COMING, And your spoil will be divided in your midst. For I will gather ALL the nations to battle against Jerusalem; THE CITY SHALL BE TAKEN, The houses rifled, And the women ravished. HALF OF THE CITY SHALL GO INTO CAPTIVITY, But the REMNANT OF THE PEOPLE shall not be cut off from the city.”

In the meanwhile, the Obama administration is moving full speed ahead to negotiate a deal with Iran and have removed them from the terrorist list!

Fellow Americans, how does one negotiate any deal with a terrorist regime who openly states that their objective is to annihilate America and Israel?

We had better get on our knees with repentance, fasting and prayer and cry out to the only One who can save us from the path we are currently on—Jesus Christ! For we are about to enter into the times and seasons in which men’s hearts will fail them due to fear!

However, for His faithful remnant we have God’s covenant promise based on Psalm 112 that our heart will be steadfast because we trust in the Lord and we will NOT be afraid. For God’s has not given us the spirit of fear, but of power and of  love and of a sound mind based on 2 Timothy 1:7. In addition, God will keep those in perfect peace, whose mind is stayed on Him because we trust in Him no matter what may come (Isaiah 26:3).

Also, for what it is worth, please sign the petition from the ACLJ and pray that President Obama will fail at his attempt to reverse the decades-long policy of protecting Israel at the United Nations. In addition, we must pray like never before for President Obama’s soul to be saved and that he comes to the saving knowledge of Jesus Christ before it is too late for all eternity! Because he, and unfortunately our nation, will reap what he has sown for coming against Netanyahu and Israel!

President Obama is reportedly willing to use the U.N. as a weapon against Israel, to force it to bargain with terrorists who seek only Israel's destruction.

In closing, remember to say Psalm 91 out loud every day and stand in the gap for your family and friends in the mighty name of Jesus. This is God’s covenant promise of protection for those who LOVE Him and KNOW His name!

Moreover, just like Daniel, Jeremiah, Shadrach, Meshach, and Abed-Nego experienced long ago, we will all be affected in some way as we reap God’s full judgment on ALL the nations including America. For He makes His sun rise on the evil and on the good, and sends rain on the just and on the unjust. And, as 1 Peter 4:17 proclaims, “For the time has come for judgment to begin at the house of God; and if it begins with us first, what will be the end of those who do NOT OBEY the gospel of God?”

Tragically, this includes many people who sit in the pews of churches week after week that "profess" to be His! Yet, they do NOT OBEY the WHOLE counsel of God's Word or His Voice!

As a matter of fact, based on Hebrews 5:9-11 below, the apostle Paul specifically says that Jesus Christ becomes the author of eternal salvation to all WHO OBEY HIM! This substantiates the truth based on the whole counsel of God’s Word that there is much more required of us to WORK out our salvation with fear and trembling once we BECOME saved than what we are taught at most churches!

“And having been perfected, He [Jesus] became the AUTHOR OF ETERNAL SALVATION to ALL who OBEY HIM, called by God as High Priest “according to the order of melchizedek,”  of whom we have much to say, and hard to explain, since you have become dull of hearing.” ~ Hebrews 5:9-11 (NKJV)

And last but certainly not least, we must all repent or perish based on the words of our Lord and Savior Jesus Christ in Luke 13: 1-5 below.


Together we CAN make a difference for His Kingdom and America!

Blessings until we meet again.

Founder of Angel of Love and Light Ministries
http://www.angeloffaith777.com