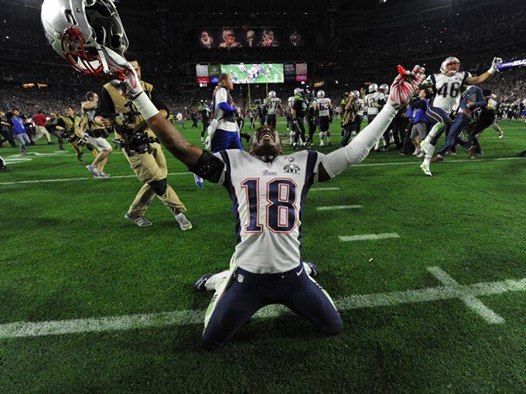 Malcolm Butler has vision that changes outcome of Super Bowl 49 Undrafted free agent Malcolm Butler picked off a Russell Wilson pass on the goal line, snuffing out the Seahawks' drive and securing a miracle 28-24 victory that have the Patriots the fourth -- and perhaps most satisfying -- Super Bowl championship in their history. Malcolm Butler said when asked, "I just had a vision that I was going to make a big play and it came true."

Yesterday morning, on Sunday February 1, 2015,  I woke up and heard the song “Mine Eyes Have Seen the Glory of the Coming of the Lord” over and over again. So I said to my husband to guess what song was playing over and over again in my head. He started singing the anthem to the beginning of the Super Bowl that they play as the players run onto the field. I laughed and told him a resounding no that was not the song and told him the aforementioned song that I couldn’t get out of my head.

I saw this article that I have provided the link to below, posted on Face Book AFTER the Super Bowl game ended, and after I worshipped the Lord before the game and after the game. I knew that it was not a coincidence that this is the very song that I woke up to that morning! Up until this time, I had no idea that the Battle Hymn of our Republic’s  anniversary was on February 1, 1862, 153 years ago, which just happened to be the same day as yesterday’s Super Bowl.

For this article talks about the ending of slavery so long ago yet it refers to the sex-trade slavery which is now so prevalent. And, in fact, this article mentions the sex trade going on at the Super Bowl. Earlier on Face Book I saw this article posted.

Teens as young as 13 rescued from Super Bowl Sex Trafficking

But here is the rest of the story of why I heard this song playing in my head this morning. This Super Bowl game ended like no other and here is the significance.

First, I need to tell you that I never watch football, except for the Super Bowl, even though my husband and my son love to. So this evening we ordered wings and watched the game as a family. It was in the fourth quarter after the Sea Hawks had that bizarre play where the player for the Sea Hawks somersaulted and finally hit the ground BUT the football never touched the ground that for some I started rooting for very excitedly and passionately for the Patriots even saying out loud in front of my husband and son, “Lord allow the Patriots to win the game.”

At the time I thought it was because I am originally from New England—but there is more to the story of why I started hooting and hollering uncharacteristically on behalf of the Patriots and was even saying out loud, like they could hear me, that they could overcome—so much so my son kept laughing at me and looking at his dad because he has never seen me become so enamored and excited about a football game ever before.

The Patriots Malcolm Butler intercepted the ball and the rest is history. They OVERCAME! Malcolm Butler the football player for the Patriots who caught the interception when questioned by a reporter said that he saw a VISION and the next thing he knew IT HAD HAPPENED! He intercepted the ball against all odds and the Patriots won the battle for their FOURTH Super Bowl title against the Sea Hawks in the FOURTH quarter  game, when the Sea Hawks were only FOUR points down!

In case you are wondering—the number FOUR when used in the Bible represents THE NUMBER OF CREATION - North, South, East, West; 4 Seasons. The 4th commandment is the first that refers to the earth. The 4th clause of the Lord's Prayer is the first that mentions the earth. The materials of the tabernacle were four and so were the coverings and the ornamentations. We have seen that three represents divine perfection, with special reference to the triune Godhead. The father, one in sovereignty, the Son the second person who was made incarnate and the Spirit the third person of the Godhead. Four is three plus one, and it denotes therefore that which follows the revelation of the three in one God, namely His creative works. God is known by the things which He created.

But the story doesn’t end here. After the game I let my dog outside to go to the bathroom and when I walked outside to get him the brightness of the full moon caught my eye and it literally had a cross beaming from it and was so breathtaking that I had to stop and praise the Lord! And, when I did I heard the Holy Spirit clearly say to me that the ending of the Super Bowl game was prophetic for America for this reason. When the hope of all the true patriots in America seems lost and it seems that we are going to lose this nation-- at the last possible minute we will OVERCOME in Him despite the odds! Halleluiah!

Last, but certainly not least, before I went to bed the Lord had me sing out loud the lyrics to the Battle Hymn of the Republic which is below.  If you get anymore prophetic revelation about this after you read the article and the lyrics to this song, please let me know.

"Mine eyes have seen the glory of the coming of the Lord:
He is trampling out the vintage where the grapes of wrath are stored;
He has loosed the fateful lighting of His terrible swift sword:
His truth is marching on.

I have seen Him in the watch-fires of a hundred circling camps;
They have builded Him an altar [prayer altars] in the evening dews and damps;
I can read His righteous sentence by the dim and flaring lamps:
His day is marching on.

I have read a fiery gospel writ in burnished rows of steel;
'As ye deal with my contemners, so with you my grace shall deal;
Let the Hero, born of woman, crush the serpent with his heel,
Since God is marching on.

He has sounded forth the trumpet that shall never call retreat;
He is sifting out the hearts of men before His judgment-seat:
Oh, be swift, my soul, to answer Him! Be jubilant, my feet!
Our God is marching on.

In the beauty of the lilies Christ was born across the sea;
With a glory in his bosom that transfigures you and me:
As he died to make men holy, let us die to make men free,
While God is marching on."

Together we CAN make a difference for His Kingdom and America! Thanks and God Bless!

Our Constitution was made only for a moral and religious people.  It is wholly inadequate to the government of any other.” ~ John Adams