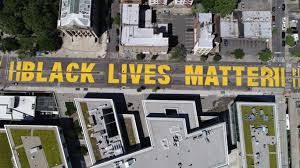 The city council for Montpelier, Vermont, unanimously rejected a petition to paint an American flag and the phrase “Liberty and Justice for All” in front of the Vermont State House.

The city council made its decision in a contentious Wednesday night meeting where the members heard arguments for the murals from GOP gubernatorial candidate John Klar and several other supporters. Klar wanted to paint the flag on one side of an existing “Black Lives Matter” motto on the street, and the phrase “Liberty and Justice for All” in red, white, and blue painted on the other side.

The council rejected the petition on appeal after the Montpelier city manager’s office rejected a petition by Klar to close State Street in order to paint the mural. The office said the city needed at least 45 days to approve a street closure, according to the VT Digger.

On June 12, the city council appeared to forgo the 45-day rule in an “emergency” meeting to approve painting the phrase “Black Lives Matter” down State Street in front of the State House the next day.