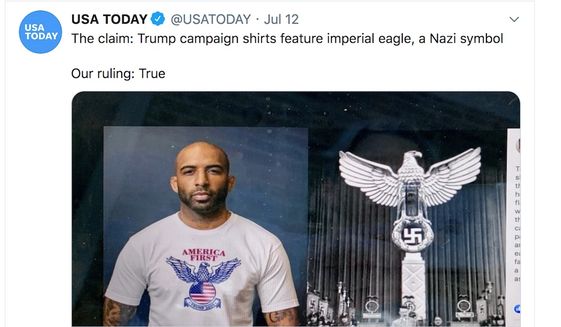 It’s official, the useful idiots on the Left and never-Trumper clan have simply lost their damned minds. The American eagle on your money is now deemed a cancelable object because President Trump’s campaign store put an eagle on a tee-shirt that they claim, if you squint your eyes and look a thousand yards out there somewhere there’s a Nazi symbol.

To repeat: They’re now making an attempt to dirty-up or cancel the American eagle symbol that you see on your money.

Don’t roll your eyes and click away. Stick with me because things get hilarious from here.

And  USA Today is happy to go along with the troll.

The so-called fact-checker at the publication, Will Peebles, reports that Twitter trolls, Facebook users, and “The Lincoln Project” have contrived a story that a Trump campaign shirt is a Nazi symbol.

The similarity was first noticed, according to Forward, by two Twitter accounts, Bend the Arc: Jewish Action, described as a Jewish progressive group, and the Lincoln Project, an anti-Trump group formed by Republicans.

“The President of the United States is campaigning for reelection with a Nazi symbol. Again,” Bend the Arc tweeted on July 1.

That’s right, the best-friend-Israel-ever-had-in-the-Oval-Office-since-Harry-Truman has now morphed from being a Russian secret agent to being a damned Nazi using a symbol that’s “is common in American politics” and is on your money.

Wow I can’t wait for @USATODAY to reach out to @SpeakerPelosi about this Nazi symbol that she wears every day.

This is truly a threat to our Democracy. https://t.co/Dj0CymDx3k pic.twitter.com/KRWi7RrejB

Hey, @USATODAY, now do the symbolism of the imagery in the pin worn by these four women, all proud Democrats: https://t.co/Kib2Kh902N pic.twitter.com/yRHZaUMllr