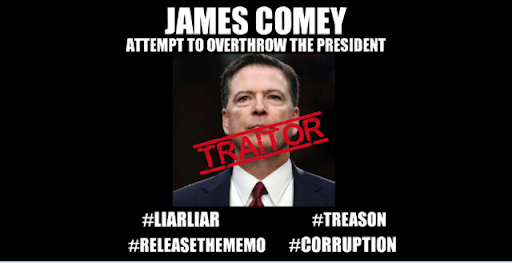 FBI Agents Peter Strzok and Joe Pientka interviewed National Security Advisor Michael Flynn on January 24, 2017. According to documents presented in the court case, agent Peter Strzok did the questioning and agent Joe Pientka took most of the notes.

Following the interview agent Pientka then took his hand-written notes and generated an official FD-302; an FBI report of the interview itself. There has been a great deal of debate over the first draft, the original FD-302 as it was written by Joe Pientka. In the case against Flynn the DOJ prosecutors never presented the original Pientka 302.

On May 2, 2020, the DOJ, using new information gathered by U.S. Attorney Jeff Jensen, declassified and released a segment of James Comey testimony that was previously hidden.  Within the transcript Comey says Pientka wrote the Flynn 302 on January 24th immediately following the interview. [Screengrab below – pdf here ]

People defending the FBI have even said it never existed.  However, the testimony of FBI Director James Comey proves the 302 was drafted on January 24th.

Lisa Page is “pissed off” because Peter Strzok previously edited the 302 and she says he “didn’t even attempt to make this cogent and readable.”

Peter Strzok replies back to Lisa Page that he was “trying to completely re-write the thing so as to save Joe’s voice”, because Joe Pientka was the actual author.

Peter Strzok is re-writing the interview notes of Pientka in order to construct the framework to accuse Flynn of lying. Lisa Page is editing the re-write to make it more cogent and readable.

The question has remained: Where is the original 302 report as written by Pientka?

While the question(s) around the missing original 302 have yet to be reconciled, one possible path to discover its location and a copy of its original content lies in the testimony of Sally Yates. Former DAG Sally Yates testified to congress that after the Flynn interview DOJ-National Security Division:

“The DOJ-National Security Division received a detailed readout from the FBI agents who had interviewed Flynn.” Yates said she felt “it was important to get this information to the White House as quickly as possible.”

Yates is describing the Pientka 302. The Pientka 302 could have been received at the DOJ-NSD later in the evening of January 24th, or perhaps the morning of the 25th. Either is possible because Yates was having meetings about the topic.