Colin Kaepernick was supposed to be an NFL star, but he ended up being a flash in the pan. When his lack of talent was exposed, he resorted to “protesting” to get headlines.

Now, even those days are numbered because Kaepernick is no longer under contract after parting ways with the San Francisco 49ers, via USA Today.

When Kaepernick first hit the scene, some pundits thought he was the future of the league. Along with the likes of Robert Griffin, he was going to change the way the QB position was played in the NFL.

As is typical with gimmicks, of which I have always said Colin was, NFL coaches get tape, and they expose them rather quickly.

NFL players are supposed to make progress as their careers move forward, but Kaepernick got worse with every passing season, sending the 49ers into the abyss.

After a major injury and some serious downtime, Kaepernick turned radical and went anti-police and pro Black Lives Matter, ultimately leading to his silent protest of refusing to stand during our national anthem.

When the press stuck the microphone in his face, he said all the popular trigger words like oppression and police brutality as well as calling Donald Trump a racist, proving he was scanning headlines instead of actually doing research and educating himself.

He was then an athlete with a voice who had just enough education to be dangerous but not enough to actually know anything — but plenty loud enough to cause significant problems.

I, along with many other people, questioned why he did not openly take this stance when he was a star in the league. With him literally warming the bench, he was now using his newfound “social awareness” to snag headlines.

Personally, I could not wait for him to go away because he was a no-talent, flash in the pan QB contributing to the divide rather than working to do something to help bring the country closer together.

Instead of wearing socks with police officers depicted as pigs, he should have been going out into the community working WITH the police to figure out how to fix the wrongs he claimed to be so passionate about.

Now, any team that decides to pick him up knows he brings more issues than talent with him.

Will he get a second chance with another team? I hope not because his 15 minutes of fame were more than enough for most of us. 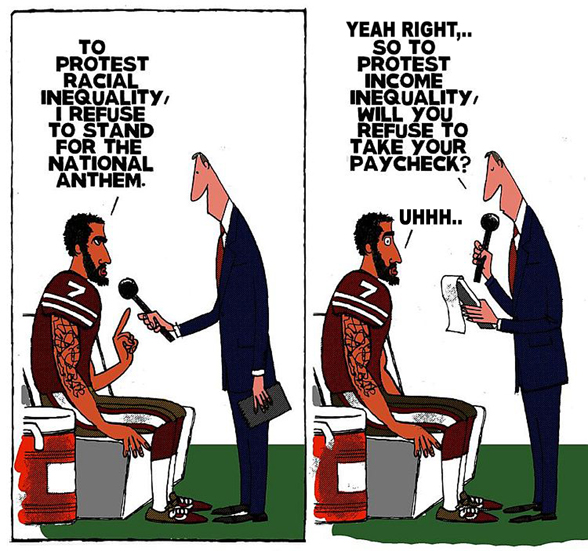 Ya' think any team is going to take him now?

He's a major liability because of his previous bad publicity and he's already been figured out by any of the NFL opposing team's defense .....a long time ago. In other words, he's been a one hit wonder.....he's toast.

So Kaepernick...THIS ONE'S FOR YOU:

Frank, you hit the nail on the head.  This jerk is just that......a total jerk. I used to enjoy big league baseball, but after the players started getting paid outrageous amounts of money, I became disgusted with it. The people in the military who protect us don't get paid enough.  When my dad was in Korea, we got charity Christmas presents from the county nurse. That was all we got that year. Other years, it was an orange, an apple and some candy.

The USAToday article is dated last October. The scumbag just had a meeting with the owner and GM of the 49ers which doesn't say he was fired or released or quit.

good glad to see it....now maybe the niners will get some one who can get the job done and respect the country.and get back on the winning track