Trump wiretap is the REAL scandal of the US election, bogus Russia story is the real cover-up

In an article for The Duran on 31st October 2016 – just a week before the election – I said that Hillary Clinton and her supporters had a planted a bomb under US democracy by orchestrating a campaign claiming that her opponent Donald Trump was the favoured candidate of Russia, and that the result would be that if Donald Trump were elected his legitimacy as President would be challenged.

In a further article for The Duran on 10th December 2016, in the fraught run up to the inauguration and whilst the Democrats and the Hillary Clinton campaign were actively lobbying electors on the Electoral College to disregard the results of the election and to vote against Donald Trump, I said that the CIA and the US intelligence community by playing up the paranoia against Russia were engaging in what amounted to a coup against the country’s constitutionally elected President.  The word ‘coup’ is now also being used by people like Mark Levin to describe what has been happening.

What we now learn is that the Obama administration, of which Hillary Clinton was once a part, used the US’s federal security and intelligence agencies during the election to spy on Hillary Clinton’s opponent, Donald Trump, and on his campaign.  They did so despite the fact that no evidence existed or has ever come to light of any wrongdoing by Donald Trump or by anyone else working on his behalf or for his campaign such as would normally justify surveillance.

This is the true scandal of the US Presidential election of 2016.  By contrast the various claims of Russian interference in the election are unproven and threadbare and almost certainly wrong, whilst the claims of illicit contacts between the Trump campaign and Russia are undoubtedly false and wrong.

Donald Trump is comparing this scandal to Watergate.  On any objective assessment it is far worse than Watergate.  The reason Richard Nixon had to set up his own amateur intelligence agency within the White House to carry out his ‘dirty tricks’ – the so-called “White House plumbers” – was because the federal security and intelligence agencies – the CIA and FBI – refused to do his bidding by acting against his political opponents.  By contrast on this occasion these same federal security and intelligence agencies have actively colluded in taking action against Donald Trump – the Obama administration’s and Hillary Clinton’s electoral opponent – by carrying out surveillance upon him and his associates though there has never been any evidence that either he or they did anything wrong.  That is something which ought to cause serious concern to people, though so far with the exception of a small number of people it does not appear to be doing so.

Permalink Reply by Michael Gervais on March 5, 2017 at 6:55am
The Obama wire tap is the real scandal and it is more serious than Watergate

Earlier this morning, Trump took to Twitter to express his outrage over wiretapping at Trump Tower during Obama’s Presidency. Back in November, the media did confirm that wiretapping did allegedly take place, viaHeat Street:

Contrary to earlier reporting in the New York Times, which cited FBI sources as saying that the agency did not believe that the private server in Donald Trump’s Trump Tower which was connected to a Russian bank had any nefarious purpose, the FBI’s counter-intelligence arm, sources say, re-drew an earlier FISA court request […].

The original FISA request which specifically named and broadly targeted Donald Trump was denied, a second request was redrafted months later which narrowed down on equipment in Trump Tower. The second request is said to have been granted, despite the fact that FBI sources did not believe these servers to be of actual national security or possess any illegal ties to Russia. The notion that this second FISA warrant was granted is highly significant as they exist to investigate cases when Foreign Intelligence is suspected of operations in the US.

The implication is that Trump or one of his employees was secretly functioning as a Russian-sanctioned spy (which is obviously absurd). However illegitimate the request was, the granting of said FISA request allows the government major access:

Pursuant to FISA, the Court entertains applications submitted by the United States Government for approval of electronic surveillance, physical search, and other investigative actions for foreign intelligence purposes.  Most of the Court’s work is conducted ex parte as required by statute, and due to the need to protect classified national security information.

Contrary to a lack of any evidence by the Obama Administration or FBI, the possibility of the second FISA request being granted would indeed monitor activity within Trump Tower. Again, this FISA request was issued with no definitive proof/evidence that Trump had any nefarious ties to Russia – instead, it bears the hallmarks of a political witch hunt.

If proven, there is a good chance the issuing judge and corresponding FBI personnel will soon face serious jail time. Liberal media is ignoring this, and instead seems to have coordinated a large online campaign with headlines that almost consistently read “Provides No Evidence”. So let’s get this straight: The GOP is accused of colluding with Russians MSM publishes as a front-page story fact, Trump accuses Obama of wiretapping and… “PROVIDES NO EVIDENCE!”

So my first question is........ What happens if all this evidence disappears before we can arrest these traitors and get them in court?  We're still "missing" 30,000 emails...

A CEO of a corporation would lock everything down and immediately flood all the company's departments (government's agencies) with auditors.   ...and ya just gotta think Trump thinks like that.

The GOP congress had the power to impeach obama for years, They had over 500 clear violations of the law by him and his minions.  The big quon is why they did not act?  Did obama have something on them that prevented them from doing the job the American people demanded.  I sure hope President Trump exposes all of the DNC corruption, and then forces congress to take action.  Perhaps Sessions can go after obama, holder. lynch and hillary which does not have anything to do with the Russian story that obama planted just before he left office.

They didn't act because they are complicit and approved of what Obama and his administration were doing but didn't want their dirty little finger prints on it. Once you realize and accept that then everything makes sense. 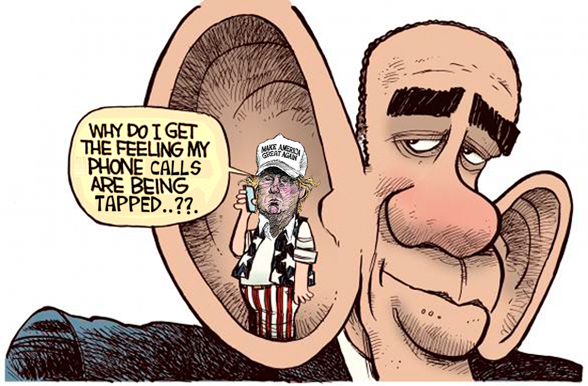 obama should go to jail he is a criminal

Gitmo is waiting with open arms for the entire OWEbama administration  and Clinton campaign group.

String obama up by the neck and stretch it!

Maybe President Trump is holding the evidence back until papers can be filed so the "rats" don't have time  to run. You all know the GOP in known for there lack of doing anything that may "Rock the boat". Maybe Trump with light a fire under them???