Kushner's family are not natural born Israeli. They migrated into Israel from the EU. Kushner's past has all ways been hidden and his agendas never spoke of, with the global elite.

President Donald Trump will unveil a new plan Thursday to overhaul the existing U.S. immigration system with a program developed by his son-in-law, Jared Kushner, that stands little chance of passing Congress.

The proposal calls for some of Trump’s promised border wall to be constructed while ignoring key Democratic priorities, including legal status for millions of immigrants brought to the country illegally as children.

The plan would rank would-be immigrants by metrics including age, English proficiency, an offer of employment at certain wage levels or in specialty jobs, or vocational training, according to three administration officials. The officials asked not to be identified discussing the plan ahead of Trump’s speech.

The proposal includes construction of Trump’s promised wall at 33 “priority” locations along the Mexican border, and higher immigration fees would finance continuous upgrades of infrastructure along the border and at ports of entry. The White House would also overhaul the asylum process in a bid to reduce claims for refugee status at the border, after a surge of migrants claiming danger in their home countries overwhelmed immigration courts. 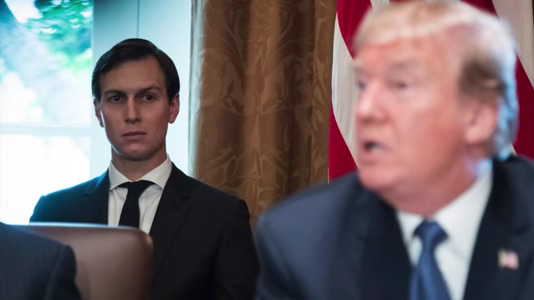 The White House says the system would attract more skilled immigrants who could boost the U.S. economy, while reducing the flow of illegal immigration. But Kushner’s plan seems unlikely to gain traction on Capitol Hill — the administration officials declined to name even Republican lawmakers who would support it.

The proposal does not address how the administration would handle millions of immigrants already living in the country without documentation. It would eliminate programs championed by Democrats, including the diversity visa lottery, instead offering additional ‘points’ under the merit system to citizens of certain countries. The officials did not say which countries would be favored.

The plan is silent on the Deferred Action for Childhood Arrivals program, which offers deportation protection for immigrants brought to the country as children.

White House adviser Jared Kushner's proposal to reform the US legal immigration system will be broken into two parts: one focused on border security and the other on legal immigration, according to a senior administration official.

The first part of the proposal deals with border security. This would include constructing physical barriers where needed and modernizing ports of entry in the north, south and on the coasts -- so that every person, vehicle and cargo container is scanned to prevent anything illegal from coming into the country, and that trade is facilitated more quickly. This proposal, the official said, would protect rights and respect due process while also preserving the right to detain, adjudicate and remove any individual if need be, especially people trying to circumvent the legal system.
All of the following countries are signed into the UN Global Migration Compact.
______
The second part of the proposal asks what should legal immigration look like. With 185 different kinds of visas, the system right now is easy to game, the official said. This proposal would for now keep the level of immigration at the same level it is currently, and work toward a merit-based system based on the Canadian, Australian and New Zealand systems.
Kushner, President Donald Trump's son-in-law and senior adviser, has been a sounding board on legal immigration reforms.
Kushner insisted that he and senior adviser Stephen Miller, an influential voice on immigration in the White House, have "not had any fights" and said he is putting together "a really detailed proposal" to reform the US immigration system, but did not reveal any of the components of his proposal.
"The President asked me to work on this topic," Kushner said. "This isn't one of the topics that I came to Washington to work on."
Kushner is reaching out to the experts within the administration to try to form a proposal, the official said. For instance, Kushner has reached out to lawyers throughout the administration and career professionals at Customs and Border Protection and said, "forget about what politicians think -- what do you think? What do you need to do your job? What does a detailed proposal look like?" Kushner has also reached out to allies on Capitol Hill and, quietly, some Democrats.
The goal is to produce a plan that the White House thinks is defensible, the official said, rather than have a proposal that is a mishmash of compromises. Kushner has been working with Kevin Hassett and the Council of Economic Advisers to make sure that by bringing in more high skilled workers the US would not lower wages.
Kushner said Tuesday he and his team will be presenting the latest version of their proposal to Trump later this week or next week and Trump will likely offer changes.
https://www.cnn.com/2019/04/24/politics/kushner-immigration-plan/in... Thanks Hank. There are PLENTY of qualified workers here in America already. This seems to have escaped the rat-fink eyes of Mr. Kushner. Many of those are Veterans and their children, relatives, etc.

I totally reject any plans Mr. Kushner has for America. He has proven to be an opponent of America and as the article stated has an uncertain past. Why?

If Mr. Kushner is so interested in helping "foreign workers" then he can go THOSE Countries and pitch his plans to make THEIR countries better, thus keeping those citizens at home and saving them the trouble, expense and danger of "immigrating" to America.

I want to see Pres Trump and the White Hats make America Great Again and Mr. Kushner's plans are nowhere near making that happen. One example is the funds given to make a home for Homeless in NYC and he used them to make a luxurious hotel for rich folks only top afford going there. So sad that he is attached to trump in any way.

But if Pres Trump is to follow thru on his campaign pledges of making America Great Again then he will have to remove any influence from his son-in-law.

Kushner is the elder son of the former real-estate developer Charles Kushner, the son of Jewish immigrants from the USSR.

They also have deep ties to the Soros Foundation as well as the Rothschild family.

You should look for members of their team and whom they are connect to.

Chairman of the Council of Economic Advisers Kevin Hassett CFR

Who heads the Council of Economic Advisers?

Jason Furman was confirmed by the Senate on August 1, 2013 as the 28th Chairman of the Council of Economic Advisers. In this role, he serves as President Obama's chief economist and a Member of the Cabinet.

Who is President Trump's economic advisor?

Gary David Cohn an economist and investment banker who served as the 11th Director of the National Economic Council and was the chief economic advisor to President Donald Trump from 2017 to 2018. He was the president and Chief Operating Officer of Goldman Sachs from 2006 to 2017.

The look in Jared Kushner's eyes, as if he is saying, obey the elite, he is a part of a cult, I see it in his face.

He is upset because his panties is giving him a wedgie....:)- LMAO..