The ongoing criminal probe surrounding Hillary's email server has been marked by opacity and lack of virtually any disclosure, not to mention a major turf war between the FBI and the DOJ, which is why many were surprised when overnight the WSJ revealed that at the center of the probe over Hillary's handling of classified information are a series of emails between American diplomats in Islamabad and their superiors in Washington about whether to oppose specific drone strikes in Pakistan.

As the WSJ writes, the 2011 and 2012 emails were sent via the “low side’’—government slang for a computer system for unclassified matters—as part of a secret arrangement that gave the State Department more of a voice in whether a Central Intelligence Agency drone strike went ahead, "according to congressional and law-enforcement officials briefed on the Federal Bureau of Investigation probe." Note the last and recall that two months ago we noted that according to Chuck Grassley, an FBI "source" may leak what the FBI has uncovered so far, to wit:

It appears that this is precisely what may have happened, and the "source" used the WSJ as the distribution platform.  And now that we (don't) know the "who", here is the "what."

The CIA drone campaign in Pakistan, though widely reported in Pakistan, is treated as secret by the U.S. government. Under strict U.S. classification rules, U.S. officials have been barred from discussing strikes publicly and even privately outside of secure communications systems. The State Department said in January that 22 emails on Clinton’s personal server at her home have been judged to contain top-secret information and aren’t being publicly released. Many of them dealt with whether diplomats concurred or not with the CIA drone strikes, congressional and law-enforcement officials said.

As the WSJ adds, some of the [drone-related] emails were then forwarded by Clinton’s aides to her personal email account, which routed them to a server she kept at her home in suburban New York when she was secretary of state, the officials said. Investigators have raised concerns that Clinton’s personal server was less secure than State Department systems.

The vaguely worded messages didn’t mention the “CIA,” “drones” or details about the militant targets, officials said. The still-secret emails are a key part of the FBI investigation that has long dogged Mrs. Clinton’s campaign, these officials said. They were written within the often-narrow time frame in which State Department officials had to decide whether or not to object to drone strikes before the CIA pulled the trigger, the officials said.

This is an issue, and potentially a criminal one, because "law-enforcement and intelligence officials said State Department deliberations about the covert CIA drone program should have been conducted over a more secure government computer system designed to handle classified information. State Department officials told FBI investigators they communicated via the less-secure system on a few instances, according to congressional and law-enforcement officials. It happened when decisions about imminent strikes had to be relayed fast and the U.S. diplomats in Pakistan or Washington didn’t have ready access to a more-secure system, either because it was night or they were traveling."

Wish I could get into her private server.  Talk about a jackpot to throw her in prison!   :)) 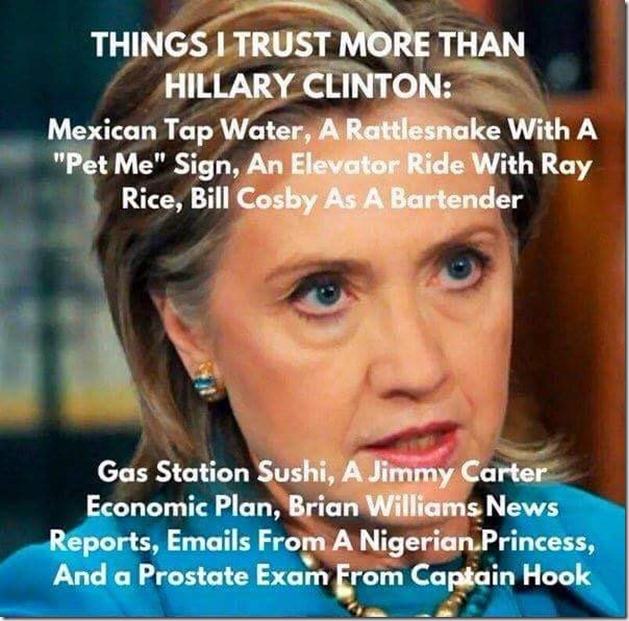 Killery should have been hung many years ago.

The emails to Obama are evidence he knew of the Server, and is implicated. Hillary is warning Obama, if she falls , he's going with her. She has him where she likes all males, by his itty, bitty Balls. What a web they weave.............more complex, more evil that we can imagine.

Your right on target with the White House demolition crews.

SSDD.   FBI is part of the same criminal enterprise as the DOJ - the obama terrorist network.  Nothing will be done.

You speak of the same FBI that knew about the Boston Bomber, and the guy in Orlando, those same "Watch Dogs"????

I thought about Hillary getting a pardon from the Obama administration but that still doesn't let her off the hook, legally only. The American People and American Voters will still hear that it was criminal offense to what she did, by putting more people in danger than just the four brave souls that lost their lives in Benghazi. We have seen that the American People have grown tire of all the lies and under the table dealings by the Democrats that are in power. Between Obama, Holder, Hillary, Harry Reid and Nancy Pelosi that's about all the American People, more than likely, have had it with Obama and the Democrats. It will be very interesting to see where this goes. We still have a long way to go to the finish line.

We keep loosing sight of the multiple crimes committed by Hillary just using a PRIVATE ILLEGAL SERVER... whether or not classified information was sent or received it is a CRIME to use a private server to conduct government business  PERIOD. Hillary has violated both the archives and security regulations and US Law. The lowest member of any government agency knows that the  use of private computers, servers, thumb drives, phones, etc., to conduct government business especially classified matters is illegal.

Gotta go get some rest now, ya'll have a good day tomorrow and be safe out there.

I'm curious if Bernie Sanders is still "tired" of hearing about Hillary's "damn" e-mails. He would have had a much better shot at picking-off the Democrat nomination if he would have hit Hillary early, hard, and more often about the scandal.

I can't figure out why Bernie didn't at least try this strategy. He's not even a real Democrat. He's less committed to adhering to the corrupt, Democrat Party ideology.