Will the mainstream media make Republican California state Senator Janet Nguyen a star like they did with Democrat Texas state Senator Wendy Davis or Democrat U.S. Senator Elizabeth Warren of Massachusetts for speaking truth to power as those liberal woman politicians were lionized by the media? 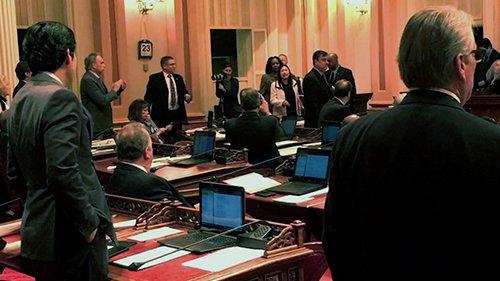 
Video posted by the California Senate GOP Caucus shows Nguyen being forcibly removed from the Senate floor by Sergeants at Arms under orders from the Democrat majority as she spoke critically about the late state Senator Tom Hayden and his support for the communist regime in Vietnam which her family fled. Hayden passed away last October but was remembered by his Senate colleagues in speeches given on Tuesday. Nguyen chose to not participate or mar the remembrance of Hayden that day.

Nguyen’s biography states she was born in Saigon and escaped with her family on a small boat.

…Born in Saigon, Vietnam, Senator Janet Nguyen and her family escaped their homeland on a small wooden 10-meter boat sailing across the South Asia Sea in search of freedom. After passing through numerous refugee camps, Senator Nguyen and her family arrived in California in 1981. She is a graduate of the University of California, Irvine where she received a Bachelor of Arts degree in Political Science.

Senator Nguyen resides in Garden Grove with her husband Tom and two sons.” 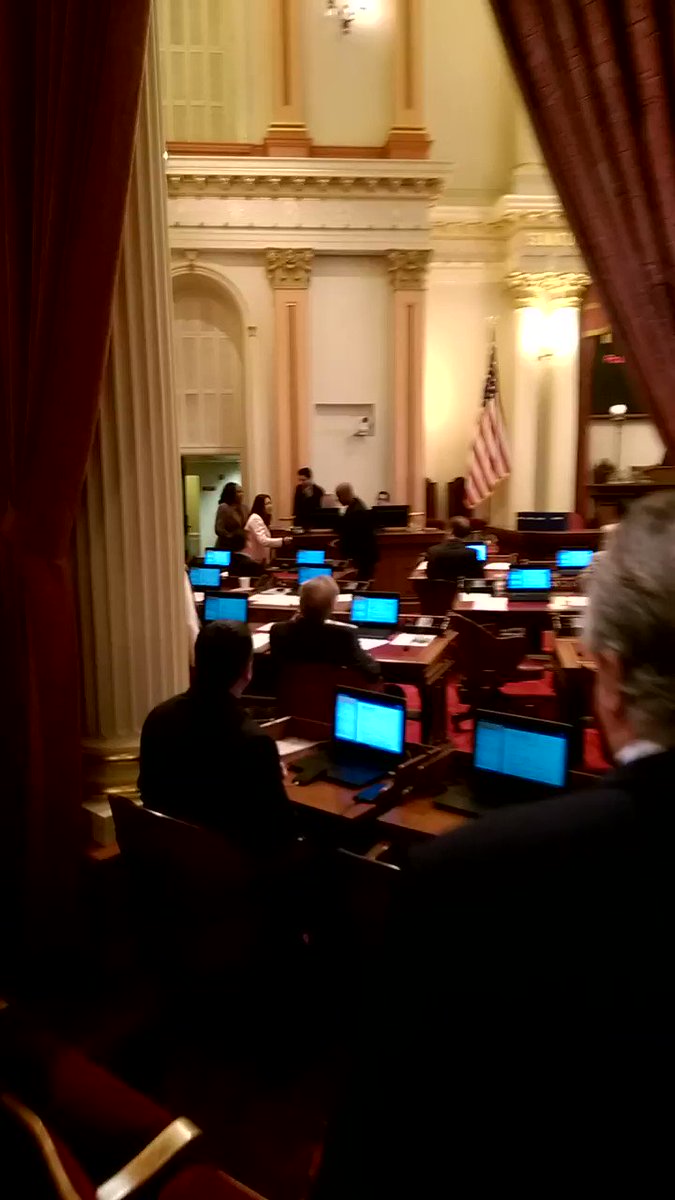 
Complete video of the Nguyen incident was posted to YouTube by CBS Sacramento. Nguyen spoke about Hayden in Vietnamese at first. It was when she translated her remarks into English that she was shut down and eventually dragged away.

The Sacramento Bee reported the floor action when Nguyen spoke.

…Nguyen attempted to make her comments during the adjourn-in-memory portion of the Senate floor session, when members typically offer tributes to constituents who have recently died. After first delivering her comments in Vietnamese, Nguyen was quickly cut off as she tried to repeat them in English.

“Members, today I recognize in memory the millions of Vietnamese and hundreds of thousands of Vietnamese refugees who died in seeking for freedom and democracy,” she said. “On Tuesday, you had an opportunity to honor Sen. Tom Hayden. With all due respect, I would like to offer this historical perspective …”

Presiding Sen. Ricardo Lara, D-Bell Gardens, interrupted Nguyen and gave the floor to Sen. Bill Monning, D-Carmel, who said Nguyen was out of order because she did not raise her objections during the Hayden tribute ceremony two days before. Nguyen continued to speak for several minutes, even as Lara repeatedly asked her to take a seat and then eventually ordered the sergeants to remove her.

“I’m outraged by the Senate majority party’s action of silencing my colleague and friend, Senator Janet Nguyen. She was physically removed from the Senate Chamber for peacefully expressing her thoughts about the Senate earlier this week honoring the memory of former state Senator Tom Hayden, a noted communist sympathizer.

“Senator Nguyen’s family escaped communist Vietnam and came to the United States in search of freedom. Unfortunately some Democrats did not like her comments and wanted to silence her. They silenced Senator Nguyen and had her removed from the Senate floor.

“I’m proud of Senator Nguyen for persisting and exercising her right as a citizen and legislator to peacefully express her views. This sad episode is a textbook case of men trying to silence a woman whose views they did not like. Making things worse, the majority party shut down the CalChannel TV feed denying the public access to its government.

“The Senate is better than this, and I am encouraged that many of my colleagues – both Democrats and Republicans – agree that the Senate should never treat a senator the way it treated Senator Nguyen today. #IStandWithJanet #ShePersisted #LetHerSpeak!!!”

Nguyen posted a statement late on Thursday to Twitter that said, “Extremely grateful for the support for my #1stAmendment right to speak for the memory of those who fled persecution after the Vietnam War.”

Extremely grateful for the support for my #1stAmendment right to speak for the memory of those who fled persecution after the Vietnam War.


The text of Nguyen’s statement that she tried to read was posted to her Senate website.

Dear Senators and the People:

Members, I recognize today in memory of the million of Vietnamese and the hundreds of thousands of Vietnamese refugees who died seeking freedom and democracy. I recognize that on Tuesday you had an opportunity to honor Senator Tom Hayden. With all due respect, I would like to offer another historical perspective.

On Tuesday, instead of participating, I chose to step out of the chamber out of respect to his family, his friends and to you. In contrast to your comments on Tuesday, I want to share what Senator Hayden meant to me and to the over 500,000 Vietnamese Americans who call California their home, as well as to the over 1 million Vietnamese Americans across the United States.

As you may be aware, Tom Hayden chose to work directly with the Communist North Vietnamese Government to oppose the efforts of United States forces in South Vietnam.

Mr. Hayden sided with a communist government that enslaved and/or killed millions of Vietnamese, including members of my own family. Mr. Hayden’s actions are viewed by many as harmful to democratic values and hateful towards those who sought the very freedoms on which this nation is founded.

Were it not for the efforts of the thousands of men and women who served bravely in the United States military and the South Vietnamese military, as well as the efforts of millions of Vietnamese citizens who resisted the communists, I would not be standing here on this Senate floor humbly representing the residents of the 34th District.

In addition to the sacrifices made during war, the efforts of President Ronald Reagan in the 1980’s allowed many Vietnamese like me to seek refuge in the United States.

In contrast to the great many people who fought to defend freedom and democracy, Mr. Hayden supported a Communist agenda and traveled to North Vietnam during the war.

Members, to this day, the government of Vietnam continues to violate the basic human rights of its citizens. They systematically continue to oppress freedoms of expression, religion and assembly and incarcerate those who speak out for freedom and democracy.

Thank you for allowing me to make my comments. I proudly stand before you as a Vietnamese-American who appreciates the freedoms that so many around the world do not enjoy.” Typical liberal policy, honoring a traitor to everything these United States stand for.  You are no longer Democrats, you are Communist traitors and should be ashamed of yourselves.

I will never forget what "Hanoi Jane" did to us!!

Bravo!!  This lady is a Patriot, for having the courage to stand up & call Tom Hayden what he was, a total disgrace, who championed Anti-American rhetoric,   He was a shop worn Hippie, who sided against America. The Vietnamese remember this man.  He was "No Good", which would fit many serving in the California Govt.  After his behavior and Hanoi Jane, they expect us to forget.  No mourning at this passing, and Bravo to Orange Country Representative, she's a Hero.  Hayden was a vile Traitor.

Just nasty pay back for making Warren sit down. The left has many horrid people that could care less what happens to anyone.

Democrats hate anybody who speaks the truth .

As a Viet Nam Veteran and still follow the political scene I would add 2 additional comments.  1;  We should insist on Term Limits for all elected members.  2.  We should hold all elected Veterans accountable for what they do for Veterans.  (IE; John McCain does nothing for Veterans except run his mouth.)

I Totally Agree Hayden and Fonda are scumbags

AND California is a democratic controlled state . . .

Nguyen's is a true American patriot.  Probably the only one there.  California no longer represents American values, but, represents their own.  What are there own values?  No body knows not even the Californians.

I like the values that are represented in this ancient TV commercial, showing what California used to be like before rampant illegal immigration, and acquiring too many fruits and nuts:

Permalink Reply by Philip D. Steenbergen on February 26, 2017 at 9:33am
In a nut shell, the communist sympathising kalifornia state senate leadership wanted no criticism of Tom Hayden. They are what they are communist hell bent on the destruction of our US Constitutional Republic. They are my sworn enemies, all of us that served in Viet Nam or any shit hole to free human beings from the oppression of communism must remember that we did take a sworn oath to protect and defend our Constitution from all enemies foreign and domestic. These hayden's, fonda's, kerry's and many just like them are disgusting traitors to their Countrymen their Nation and especially to the God of Abraham Isaac and Jacob that they refuse to recognize. They enrich their personal wealth and status as celebrities while desiring to enslave We the People in their Communism.
God will most assuredly deal with them and if they become criminally violent and threaten the innocent we may be forced to live out are oath and deal with this regardless of any reprisal. Many veterans have remained mentally sharp, and physically fit enough to still bring lots of hell down on these communist, pray that it doesn't come to that.

God Bless America and the State of Israel