Hillary said she emailed with Bill, but the thing is ... 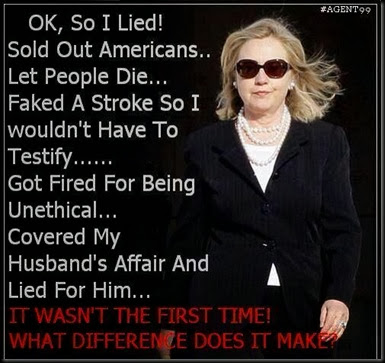 At a press conference on Tuesday, Hillary Clinton said the server that housed her emails while she was secretary of state (that was reportedly housed at her home in New York) was set up for President Bill Clinton. She also said that some of the "personal" emails she deleted were between her and her husband.

But just before Hillary began the press conference at the United Nations building, the Wall Street Journal reported that Bill Clinton does not use email.

"The former president, who does regularly use Twitter, has sent a grand total of two emails during his entire life, both as president, says Matt McKenna, his spokesman," WSJ reported. "After leaving office, Mr. Clinton established his own domain that staff use — @presidentclinton.com. But Mr. Clinton still doesn't use email himself, Mr. McKenna said."

One of Bill's emails was to astronaut and former Sen. John Glenn, the other was to U.S. troops.

But Hillary said during her press conference that her email server "contains personal communications from my husband and me."

Lets see, she said I did not do any wrong,,,,trust me. Sharpton said you just would not believe that two fires in a row just happened to burn up all my records showing I am not a crook. And then the Obama I would not tell a lie to the people of the USA,,,,,does anyone that can actually read and write believe any of these xssholes on anything? Or is it just the 42% MO-Fos that belive them?

The one thing we can say about Hillery is that she is a survivor ! now is that because she is so devious and she can look you right in the face and lie with no problem better then any used car salesmen I have ever seen, she may also have a huge amount of power in DC. but that doesn't change things Hillery will say and do what ever it takes for her to be the first Woman president, she will stop at "nothing" to achieve that goal

Bill Clinton and Hillary Clinton are both professional liars.

As for the email issue; by law,  the server must be surrendered to an unbiased professional archiver and researcher and it should be searched with the utmost diligence.

Hillary made the decision to be lazy/irresponsible/and whatever else... she made that choice to put government and personal information on same server and using same email accounts! That is her problem and not the problem of the American people; and now she has to surrender the server and anything and everything that can produce evidence to rectify  anything related to the Benghazi trial and investigation.

There are issues of conflicts of diverse manner regarding Benghazi people who were murdered and the investigation must continue. The server was paid for by the American people, one way or the other; and even if it was paid by Hillary's piggy bank; if there is a government investigation ongoing and she CHOSE to tie her personal files with the files of her government job; that is her problem and .....

HILLARY MUST SURRENDER THE SERVER TO PURSUE BENGHAZI  INVESTIGATION!

As a youth growing up my Mother taught me that if you tell 1 lie you will have to tell another to cover up that lie.  This was to emphasize that you never quit lieing because it's just like a snow ball rolling down hill it gathers more snow as it rolls.  This is also a political issue; Just as all is fair in Love and War that also include politics.  lEspecially today the politicians are masters at proving my Mother's Lesson as a perfect example of what you get into.  Of course for you and I when we tell a lie it comes back to us but with poloticians it's just a normal process and if there was such a thing as a job description for poloticians lieing would be at the top of Job Performing Duties.

Wyman Bess, other politicians have been dealt with when they were charged with breaking the laws... and it must continue to make it happen in the present. If we haven't seen it happening recently; we must see it start to happen asap.

Hillary and Obama and Eric Holder, Sharpton and all who have been diligently trampling on the Constitution; must be held accountable.

Horrible Hillary is a pathological liar, and half the people in this country still think she is the greatest thing since colored condoms.

Just another Hillary LIE.  Ho hum, so many, so little time.

Well, she lies so much, she can't keep up.  Typical liberal.  Why would anyone want her as president when she never speaks the truth?

She must surrender her server at all cost

bonnie loranger: You and the rest of the conservative people agree on this issue!  If Hillary was lazy and irresponsible and kept all the information on the same server; which in reality, she should not have had at her home; then it is her fault and she better surrender the server immediately! Any judge should understand that and should stand firm and make her surrender immediately!