Apocalyptic George Will: If Trump wins the nomination, prepare for the end of the conservative party 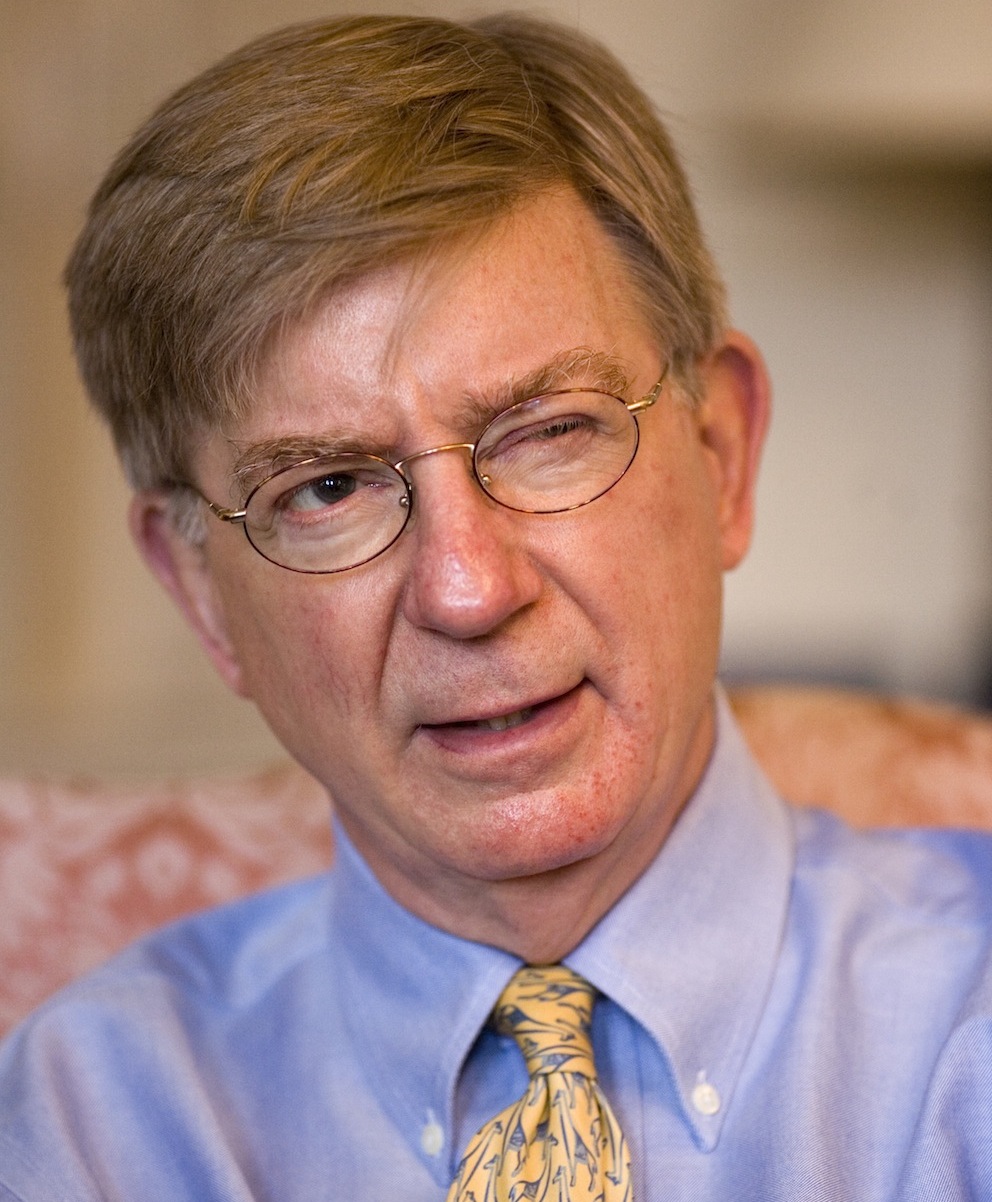 If you look beyond Donald Trump’s comprehensive unpleasantness — is there a disagreeable human trait he does not have? — you might see this: He is a fundamentally sad figure. His compulsive boasting is evidence of insecurity. His unassuageable neediness suggests an aching hunger for others’ approval to ratify his self-admiration. His incessant announcements of his self-esteem indicate that he is not self-persuaded. Now, panting with a puppy’s insatiable eagerness to be petted, Trump has reveled in the approval of Vladimir Putin, murderer and war criminal.

Putin slyly stirred America’s politics by saying Trump is “very . . . talented,” adding that he welcomed Trump’s promise of “closer, deeper relations,” whatever that might mean, with Russia. Trump announced himself flattered to be “so nicely complimented” by a “highly respected” man: “When people call you brilliant, it’s always good.” When MSNBC’s Joe Scarborough said Putin “kills journalists, political opponents and invades countries,” Trump replied that “at least he’s a leader.” Besides, Trump breezily asserted, “I think our country does plenty of killing also.” Two days later, Trump, who rarely feigns judiciousness, said: “It has not been proven that he’s killed reporters.”

Well. Perhaps the 56 journalists murdered were coincidental victims of amazingly random violence that the former KGB operative’s police state is powerless to stop. It has, however, been “proven,” perhaps even to Trump’s exacting standards, that Putin has dismembered Ukraine. (Counts one and two at the 1946 Nuremberg trials concerned conspiracy to wage, and waging, aggressive war.)

Until now, Trump’s ever-more-exotic effusions have had an almost numbing effect. Almost. But by his embrace of Putin, and by postulating a slanderous moral equivalence — Putin kills journalists, the United States kills terrorists, what’s the big deal, or the difference? — Trump has forced conservatives to recognize their immediate priority.

"Thad Cochran should be in prison for election manipulation."

I understand your view.  I also recognize there were some Tea Party candidates, across the country, that might not have been as qualified as they might have been, causing some remorse among the Tea Parties around the country.

There is no question that Thad Cochran is a SKANK and a perfect representative of the RINO/Establishment Democrat Lite Party!  There is also a good argument to be made, as you did, that McDaniel was a good candidate that could and should have won.

Sadly, we make mistakes, and, certainly, this was a big one.

If the establishment RINOs are what he's calling the Conservative party then let's get to it.

The "Conservative Party" has been hijacked by the progressives.

We need to redefine it or come up with a better name for a party who works for the AMERICAN CITIZENS again, not foreign nationalists and large corporations.

The Republican Party name changed during Reagan's years and now the good ole boys are trying to get it back to the days before.  What we really need is our own party and then lets see how many votes go their way and which candidate has the balls to run on their ticket.

It's time George Will joined Carl Rove and a host of others and the group should head "out to pasture". They are done--finished. They have nothing to say of any consequence any longer. Listening to them is pissing in the wind. They are just fops in the court of his islamic majesty Hussein Obama the First.

Who is this elitist hypocrite? 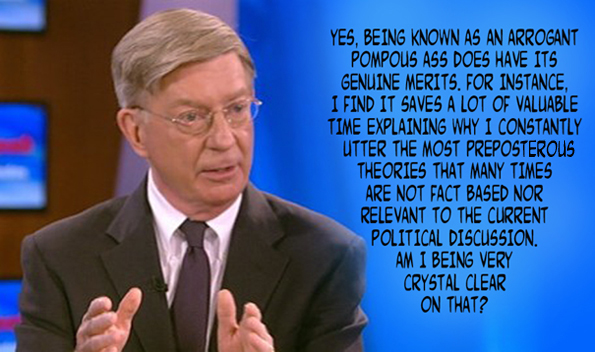 The party that prefers Hillary over Trump or Cruz? That passed the bloated Omnibus budget? That funded abortion? That funded more muslim immigrants? That party? May it die soon and rot in hell.

You state a position and then never bolster the position with proof. You are sitting at the feet of your master Bathhouse Barry and his puppeteers, Jarrett and Axelrod. Your methodology merely discounts your truthfulness. Sorry George, you have lost my respect. Show me the list of 56 that Putin was party to murdering.

I am not a "Tea Party" member exactly although I usually agree with most of the things they support. I am an American who believes in liberty and small gov., semi-isolationist and definitely tired of fighting everyone's wars. Tired of illegals, muslims and liberals and a whole list of other gov. preferred types.

Yeah, Will has revealed himself as a simpering, dangerous Neocon toady - sneering in faux upper class manner.  George Will needs a job in a sunless back office where he is not allowed to peddle his tired establishment pap.

THAT GOOD OL BOYS CROWD HAS BEEN SNOOKERING THE PEOPLE FOR DECADES.

Are you embarrassed by Trump?

The headline should be America buys 20 pounds of BS in a ten pound bag. Embarrassed? We are living in a war zone and only the one percent that bleed for us know it. Soon you will have to take your shoes off to go shopping.  Trump is America's last hope. Not only must we elect Trump we must elicit a promise from all candidates for any office that they will back up Trump to the sword hilt. We can not elect a leader and not give him his army. The rino rats and the democrats have joined forces to give our weakened nation the SOS. After eight years of lies and communist tactics of division. We finally have a man to make America greater than it ever has been. He will stop the terrorist invasion, build the great southern wall, cut taxes, create jobs and pay the bills. Not to forget we will rebuild the mightiest military the world has ever seen and will never challenge.

The only thing terrorists respect is raw power. The fools who brought this country down with lies and Mickey Mouse polls trying to head off success, from Quinapeepak to the WALTER DURANTE TIMES AND THE WAPO GESTAPO  lie like Persian rugs. 50% say Trump is an embarrassment is one major lie. They won't tell you that Latino Ladies won't vote for Hillary. They have announced to the world that the B of Benghazi is no aguela (grandmother). Both parties stand against Trump. The big lie is he has no political experience. You mean to tell me he can't stick his hand out and say the envelope please?
The rinos made him swear an oath that he would not form a third party but they made no oath to back him if he wins. We have already heard some of them promise they will vote for Hitlery rather than let freedom live. I am for a Trump-Cruz team Trump now Cruz next.
The demo-rinos must bring Trump down using Cruz. Then they will turn on Cruz and get him disqualified. In comes Bush. There is only one party just ask Billy Graham who pulled out of the Repuppy party. Why? He does not see God there. The democrats threw God out out at the last convention. You have to elect a president who remembers what freedom was like. When Americans could say Merry Christmas. WHEN BOYS USED THE MEN'S ROOM AND GIRLS USED THE LADIES ROOM. When presidents put their hand over their heart at the sound of the Star Spangled Banner and not their crotch.
The last real democrat was Harry Truman who upon being sworn in as president took the family bible from the supreme court judge and kissed it. Am I embarrassed by Trump? Sure all the way to American victory over our enemies. Viva El Trumpo. Vaya con Te Fiesta. More tea anybody?
http://www.blogtalkradio.com/spiritofamericapartybook/2015/12/23/tr...