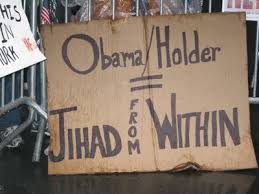 4-21-14  GUANTANAMO BAY NAVAL BASE—Families of the victims of the 9/11 terror attacks expressed shock that the FBI may be meddling in the hearings, and some speculated that it is part of an effort by the Obama Regime to completely derail the hearings and force them into federal court stateside.

WFB  Families of those killed in the 9/11 terror attacks traveled here with the intent of watching their family members’ accused killers face justice. However, many say they were horrified earlier this week when pre-trial hearings came to a halt over revelations that the FBI had launched an investigation into the accused terrorist’s defense lawyers.

Where’s the justice after 12 years?

“These things don’t just happen,” said Donald Arias, whose brother Adam was killed in the attack on the World Trade Center in New York City. “I’m very suspicious of my government.” “It wasn’t just some rogue FBI agent,” he told reporters Wednesday afternoon. “This had to be approved at the highest levels within the FBI to do this.”

POLL:  Are you going to participate in Operation American Spring ?

“They had to know this would have some effect on the proceedings here,” Arias said. “Were I a very suspicious person, some could even say that was done purposely to derail these hearing and force it back into federal court.” “It looks like a well orchestrated snafu,” added Lorraine Arias-Beliveau, Don’s sister.

9/11 Families are understandably incensed at the delays

Other families expressed outrage and frustration that the death penalty trials for the accused have been delayed without an end in sight nearly 13 years after the attacks were carried out. “They’re guilty. Let’s try them fairly and then kill them,” said Charlie Clyne, whose wife Susan was killed in Tower One.

“Take them out to the Bronx Zoo,” Clyne proposed, referring to the detainees as “parasites.” “No, I’m serious. Feed them to the lions, and this way we’ll turn them back into the streaming piles of steaming shit that they have always been.”

McGinly also said he was frustrated by the long delay in justice. “I would like you to give me these people and just walk them down my driveway,” he said. “I’ll take care of them. Okay? Deep in my heart that’s how I feel.”