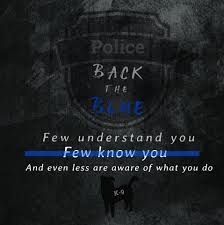 As the country sees the spectacle of anti-cop rants and total disrespect for the badge, I am reminded of the 1925 piece by William Faulkner titled "The Cop."  It is way past due to hearken back to the time when, as a young lad, he would desire to

... be a patrolman; in a blue coat and swinging a casual stick and with a silver shield on my breast, I would pace the streets away with the measured beat of my footsteps.  What to compare with this grandeur?  To be the idol and fear of the lads, to be looked upon with respect by even grown people; to be the personification of bravery and the despair of criminals.

What a different time and place.  Almost a century ago, most folks understood the danger that police faced and had a respect for the thin blue line that protected them from criminals and murderers.

Fast-forward, and can we really be surprised at the anger and dismay expressed by New York police boss Michael O'Meara as he declares, "Nobody talks about all the police officers that were killed in the last week in the United States of America and there were a number of them."

O'Meara also cites the 375 million interactions between officers and the public that were "overwhelmingly positive."

We roundly reject what happened in Minneapolis.  Our legislators abandoned us.  The press is vilifying us.  Stop treating us like animals and thugs and start treating us with some respect.

When he says the media praise violent left-wing rioters, looters, and arsonists while denigrating police officers who are putting their lives on the line every day, he is absolutely correct.  Here is a sampling of what Americans are seeing on a daily basis.