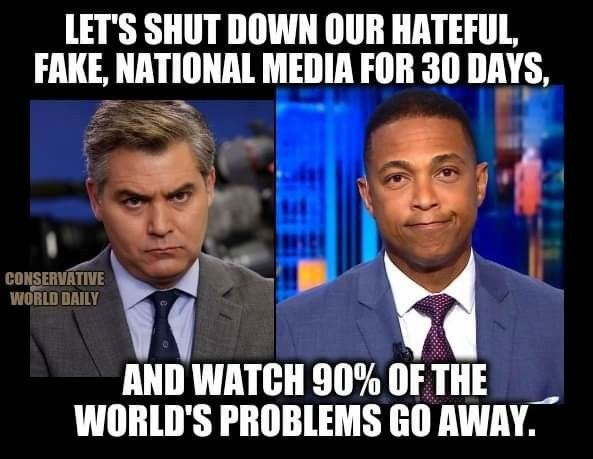 I guess we’ll be told we’re unseemly if we giggle at the cancellation of useless stooge Don Lemon’s low-rated airport lounge video muzak, or at how the Israelis leveled the Gaza high-rise housing the AP and Al-Jazeera. Well, color us unseemly, because when the media suffers, we celebrate.

And we’re not going to apologize for it. Half of America, at least, now cares about the media precisely as much as the media cares about us – that is, not at all. In fact, we actively wish it ill. We cheer when some trash website or paper folds. The frequent layoff announcements make us giddy. Sad journalists whining about how people on Twitter dare criticize them cause us to howl in delight.

Our contempt for them is a result of their contempt for us. And as individuals and collectively, we should do whatever we lawfully can to hasten the collapse of the mainstream media as an institution.

See, the media hates us and actively sides with our enemies. It’s always amusing how these hacks do not even bother to hide their full-throated collaboration with the people who want us silenced, disenfranchised, and/or dead, yet get all huffy when we refuse to treat them as the neutral truthtellers they aren’t. The most active supporters of censorship in our culture are members of the news media itself, bar none. They cover up Democrat perfidy and invent Republican scandals. They try to police our language. They condescend to us. They dox innocent citizens. They lie all the time. They carry water for liberal leakers. They try to get our own (real) reporters, like Townhall’s Julio Rosas, killed for refusing to follow the narrative.

Yet, we’re supposed to pretend they deserve our respect and deference, that they are courageous heroes battling for truth. Pfffft. They are a joke. The media is garbage, and we must treat it as such.

Take Don Lemon, preferably far away. Apparently, the business model of catering to Blue-Anon shut-ins who wear their masks in the shower isn’t working out so well. He’s off the air as of last week – maybe he’ll come back in some form to torment people running to catch a Delta flight, but perhaps CNN is tired of getting ratings on par with the Macramé Channel and the Enlarged Prostate Network. I have some history with this human punchline – in my last appearance on CNN in December 2015, he cut my mic when I refused his command not to point out his ridiculous hypocrisy regarding Felonia Milhous von Pantsuit. He will not be missed except by his fans, both of them.

Also, Don’s fellow licensed and registered regime advocate Brian Stelter is a potato. The tube’s #1 tuber is still on the air, for now, flacking for his masters and dodging hungry Dubliners.

Over the weekend, America cheered as the Israelis flattened the building housing the Associated Press in Gaza. This led to widespread laughter and high-fives among American patriots. And we were even happier when we later found out that the same high-rise had also housed some Hamas military HQs.