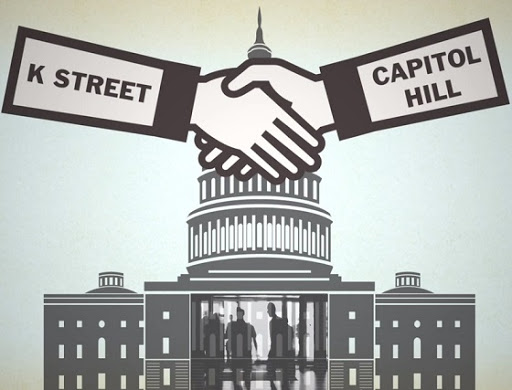 Something 99% of American voters do not understand.  Congress doesn’t actually write legislation. The last item of legislation written by congress was sometime around the mid 1990’s. Modern legislation is sub-contracted to a segment of operations in DC known as K-Street.  That’s where the lobbyists reside.

CTH often describes the system with the phrase: “There are Trillions at Stake.” The process of creating legislation is behind that phrase. DC politics is not quite based on the ideas that frame most voter’s reference points.

Most people think when they vote for a federal politician -a House or Senate representative- they are voting for a person who will go to Washington DC and write or enact legislation. This is the old-fashioned “schoolhouse rock” perspective based on decades past. There is not a single person in congress writing legislation or laws.

In modern politics not a single member of the House of Representatives or Senator writes a law, or puts pen to paper to write out a legislative construct. This simply doesn’t happen.

Over the past several decades a system of constructing legislation has taken over Washington DC that more resembles a business operation than a legislative body. Here’s how it works right now.

Outside groups, often called “special interest groups”, are entities that represent their interests in legislative constructs. These groups are often representing foreign governments, Wall Street multinational corporations, banks, financial groups or businesses; or smaller groups of people with a similar connection who come together and form a larger group under an umbrella of interest specific to their affiliation.

The for-profit groups (mostly business) have a purpose in Washington DC to shape policy, legislation and laws favorable to their interests. They have fully staffed offices just like any business would – only their ‘business‘ is getting legislation for their unique interests.

These groups are filled with highly-paid lawyers who represent the interests of the entity and actually write laws and legislation briefs.

In the modern era this is actually the origination of the laws that we eventually see passed by congress. Within the walls of these buildings within Washington DC is where the ‘sausage’ is actually made.