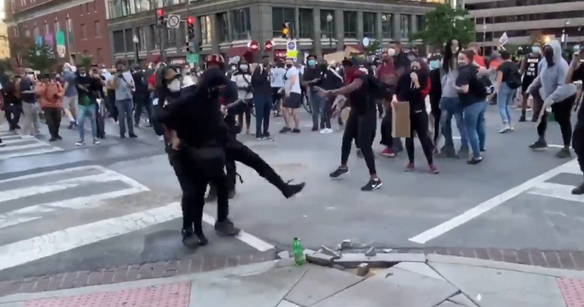 A protester who was causing damage to a city block was escorted to police lines by other protesters during a demonstration in Washington, D.C., over the weekend.

The video, captured and posted to Twitter by local news reporter Safvan Allahverdi on Sunday, shows a masked protester dressed in all black appearing to hammer and chisel away at a sidewalk block before being surrounded by other protesters.

A group of about four or five individuals detained the protester and forcefully dragged him to police officers who were stationed nearby to patrol the demonstration. It appears that police then apprehended the protester.

People can be heard cheering and shouting “take his ass!” and “go to jail!” as he was handed to the police.

Protestors in DC handed the white dude who was about to provocate the protest to the police.