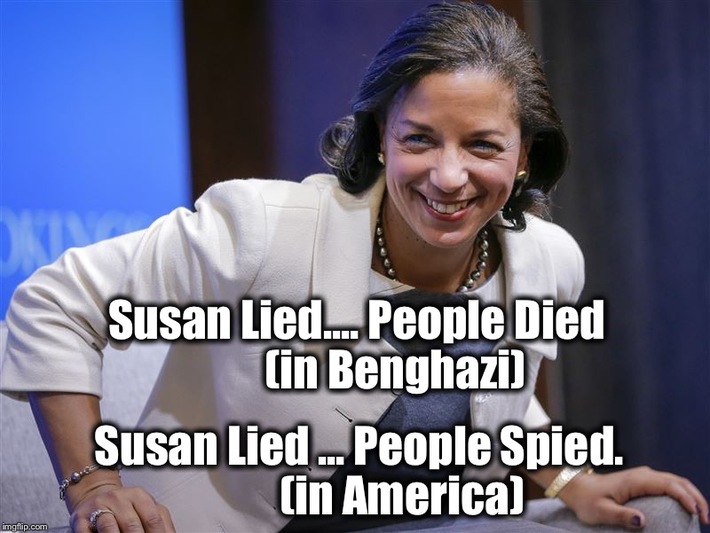 In her now fully declassified January 20, 2017 email to herself, former national security advisor Susan Rice three times claimed everything about incoming Gen. Michael Flynn was done “by the book.” In the January 5, 2017 meeting, Rice wrote, “President Obama asked if Comey was saying that the NSC should not pass sensitive information related to Russia to Flynn. Comey replied ‘potentially.’ He added that he has no indication that Flynn has passed classified information to Kislyak, but he noted that ‘the level of communication is unusual.”

On March 22, 2017, Judy Woodruff of PBS asked Susan Rice about President Trump’s claim that that the Obama administration had surveilled his campaign in 2016.  “Nothing of the sort occurred,” said Rice.

On April 4, 2017, Woodruff confronted Rice with revelations from House intelligence committee chairman Devin Nunes. As the California Republican charged, during the final days of the Obama administration, the president-elect and the people around him may have been caught up in surveillance of foreign individuals and their identities may have been disclosed.  Woodruff wondered, “Do you know anything about this?”

“I know nothing about this,” answered Rice, who knew everything about it, and this was not her first duty on the falsehood front. Back in 2014, Rice said deserter Bowe Bergdahl had served the United States with “honor and distinction.” That whopper came two years after Rice’s major starring role.

Two years later, as she praised Bergdahl, Rice claimed that “parts” of the Benghazi story turned out wrong and, “that doesn’t make me a liar. That makes me a public servant trying to say what we knew at the time.” That does make her a liar, and Susan Rice is only one of the women the president sent to do his dirty work.

UN Ambassador Samantha Power defended the administration’s decision to intervene in Libya. As she told David Axelrod in 2016, “the aftermath has proven very challenging,” and the country was “anti-foreigner.” No mention of the Americans Susan Rice claimed had been killed over a video protest. In similar style, State Department mouthpiece Marie Harf did not associate terrorism with militant Islamic jihadists. Three years after Benghazi, as the Islamic State tortured and slaughtered, Harf blamed terrorism on a “lack of opportunity for jobs.”

On the home front, Lois Lerner deployed the IRS against conservatives groups who favored limited government and lower taxes. The predatory Lerner wound up taking the Fifth multiple times and was conveniently allowed to retire. In 2018, Lerner’s boss claimed his administration “didn’t have scandals,” and recent revelations have prompted no second thoughts.

The president held the Oval Office meeting on January 5, 2017, the same day his chief of staff Denis McDonough made a request to unmask Gen. Michael Flynn, president-elect Trump’s incoming national security advisor. On January 11, Samantha Power made her seventh request to unmask Gen. Flynn, and the six others included two requests on December 14, 2016. Other requests came from treasury officials and ambassador to Italy John Phillips, but the president wasn’t going to leave the vice president out of the loop.

On January 12, 2017, a request to unmask Flynn came from Joe Biden his own self. Eight days later, outgoing national security advisor emailed herself that the outgoing president wanted it all done “by the book.” In March, 2017, Rice denied that Trump had been the subject of wiretapping and in the Washington Post charged that such “false statements” were part of a “disturbing pattern of behavior that poses real and potentially profound dangers to U.S. national security.”

Asked about the Obama administration surveillance of political rivals, Rice said, “I know nothing about this.” As the full truth begins to emerge, interested parties might dial back to May, 2017.

In Rising Star: The Making of Barack Obama, official biographer David Garrow explains that Dreams from My Father was a work of fiction and the author a “composite character.” The fiction was accepted with such fathomless credulity that in 2008 the composite character became president of the United States.