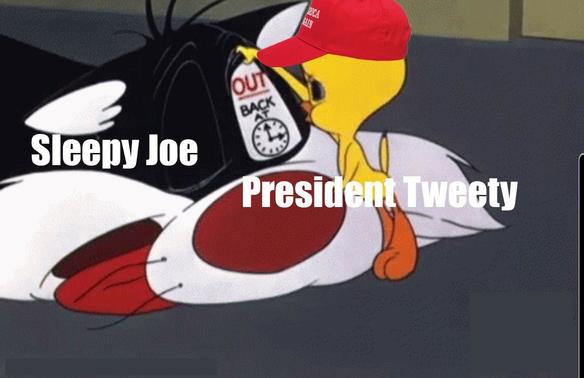 Donald Trump has made giving nicknames to his opponents one of the staples of his political toolbox. Who can forget Crooked Hillary? Or Little Marco? His penchant for branding people has shown itself to be surprisingly effective as well.

Joe Biden, ever the trailblazer, has decided to attempt to get in on the act. He’s got a new nickname for Trump, showing once again that the left can’t meme.

Biden revealed the nickname Monday while speaking to the Asian American and Pacific Islanders Victory Fund, remarking, “Trump is out there tweeting again this morning. I call him ‘President Tweety.’”

I mean come on. President Tweety? Does Biden not realize that these nicknames are supposed to offend the person being named? Trump loves tweeting and doesn’t see it as a negative. Accusing him of tweeting too much is not a slam he takes seriously, as shown by his unwillingness to cut back at the urging of some past advisors. Biden might as well be paying him a compliment. read more here: https://www.redstate.com/bonchie/2020/05/19/joe-biden-gives-trump-a-new-nickname/?utm_source=Twitter&utm_medium=social&utm_term=joe-biden-gives-trump-a-new-nickname&utm_content=1&utm_campaign=PostPromoterPro