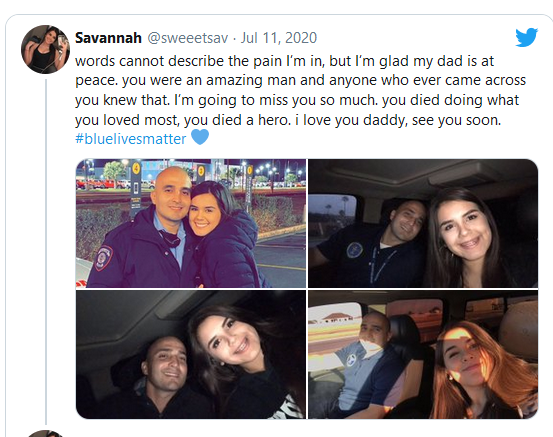 Some people on Twitter slammed the daughter of slain McAllen, Texas, Police Officer Ismael Chavez for using the hashtag #bluelivesmatter in a moving and heartbreaking tribute to her dad. However, others defended her in emotional responses, with one person telling the critics to “show some f*cking compassion.”

Others also offered tributes to the murdered police officer, recalling his respectful and kind demeanor and past work as a coach and science teacher.

Savannah Chavez posted the tribute to her Twitter page on July 11, the very day that Chavez and his partner, Officer Edelmiro Garza, Jr., were murdered in an ambush in a doorway. The police chief said the attack was unprovoked, and the officers didn’t even have time to draw their weapons.

One user responded by accusing the daughter of using a “racist” hashtag by writing #bluelivesmatter (a tweet that quickly accrued 1,700 likes).

“I am so sorry for your loss but you didn’t have to use a racist hashtag,” wrote that Twitter user, who later identified herself as a high school student, writing, “the fact that almost all these replies are by old bitter white ppl who have nothing else better to do but argue with a high schooler lmao i’m living in yalls minds rent free 💅🏽 anyway #JusticeforBreonnaTaylor.”

Responded another person, also tweeting at the daughter, “Blue lives matter was literally created in response to and to undermine black lives matter. There’s no other connotation unfortunately.”