Justices Alito, Gorsuch, and Thomas dissented from the denial. Call again. And again. Flood the lines. At least they’re getting an immediate reaction from us! 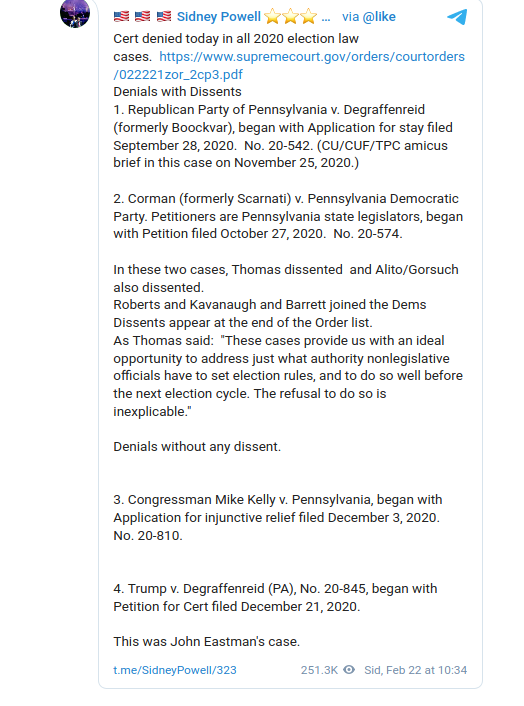 Thomas, Alito, and Gorsuch dissent, arguing the cases are not moot because, in Alito’s dissent, “the cases now before us are not moot. There is a ‘reasonable expectation’ that the parties will face the same question in the future.”

No surprise here. The Supreme Court has refused to accept a case challenging the Pennsylvania election result, on the basis that the mail-in ballot procedures were illegal, as “moot”.

Justice Thomas, dissenting, argued the Court should take the case:

The Constitution gives to each state legislature authority to determine the “Manner” of federal elections. Art. I, §4, cl. 1; Art. II, §1, cl. 2. Yet both before and after the 2020 election, nonlegislative officials in various States took it upon themselves to set the rules instead. As a result, we received an unusually high number of petitions and emergency applications contesting those changes. The petitions here present a clear example. The Pennsylvania Legislature established an unambiguous deadline for receiving mail-in ballots: 8 p.m. on election day. Dissatisfied, the Pennsylvania Supreme Court extended that deadline by three days. The court also ordered officials to count ballots received by the new deadline even if there was no evidence—such as a postmark—that the ballots were mailed by election day. That decision to rewrite the rules seems to have affected too few ballots to change the outcome of any federal election. But that may not be the case in the future. These cases provide us with an ideal opportunity to address just what authority nonlegislative officials have to set election rules, and to do so well before the next election cycle. The refusal to do so is inexplicable.