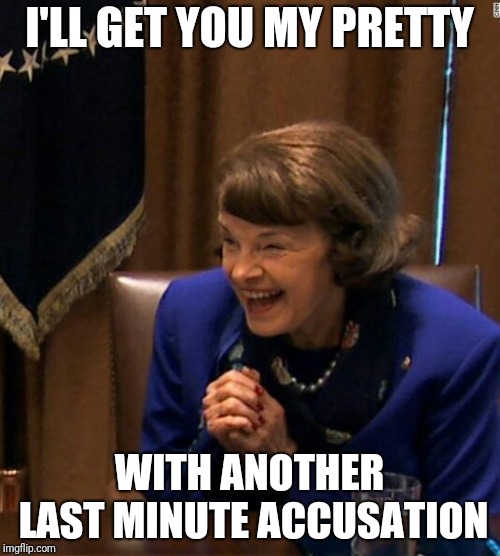 Man Oh Man the new Democratic Socialist (Marxist) Party is viscous, but what do you expect from an angry mob of Godless fascists?

Oh I know that seems harsh but let’s get real here.

The new AOC / Bernie party had two of their convention groups intentionally leave out “under” God while reciting the Pledge Of Allegiance.

Why does this matter, because the party doesn’t have a moral basis to it except, the Marxist world view. The political system that is destructive, selfish, and lead to over 100M deaths in the 20th century.

With the all hands on deck mentality, similar to the run up to the Kavanagh hearings, the left is looking for any possible way to stop the GOP majority from confirming President Trump’s 3rd Supreme court Justice.

Ahead of the Senate Judiciary Committee battle over President Donald Trump’s Supreme Court nominee, some Democratic senators have reportedly expressed concerns that Senator Dianne Feinstein (D-CA), 87-year-old and ranking member of the judiciary committee, may botch the hearings to replace the late Justice Ruth Bader Ginsburg on the court.

There are several possible reasons for their concerns, one of which is, what they considered, her poor performance it leading the charge to stop Justice Kavanaugh’s confirmation. “She’s not sure what she’s doing,” a Democratic senator, who spoke on the condition of anonymity, told Politico. “If you take a look at Kavanaugh, we may be short two senators because of that. And if this gets [messed] up, it may be the same result.”

According to Politico, two other Democratic senators have expressed concerns, both also on the condition of anonymity, about Feinstein botching the committee hearing.

“She can’t pull this off,” said another Democratic senator, while yet another reportedly told Politico that the Democratic leadership were in “an impossible position” because they couldn’t risk the optics of having to replace her.