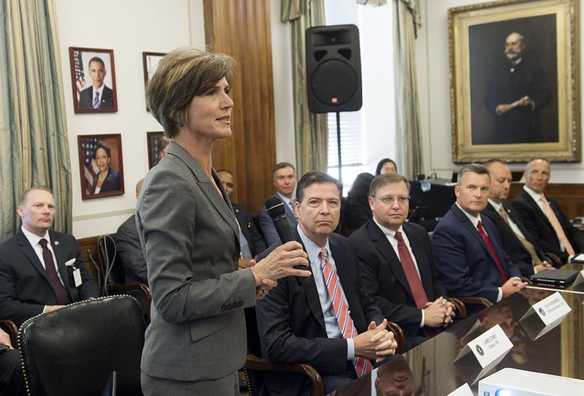 Former Deputy Attorney General Sally Yates hid from Congress during a November 2017 interview that she first learned about former National Security Adviser Michael Flynn’s calls with a Russian ambassador from then-President Obama, but had confirmed it to Special Counsel Robert Mueller’s team three months earlier, according to recently released transcripts.

Her different answers suggest that she lied or tried to obscure to members of Congress that Obama was involved and briefed on intimate details of his administration’s efforts to investigate and target Flynn.

During her interview with the House Intelligence Committee on November 3, 2017, she was asked by Rep. Denny Heck (D-WA) how she “first learned” about Flynn’s calls with then-Russian Ambassador to the U.S. Sergei Kislyak.

Yates responded that she learned it from the FBI and the National Security Division (NSD) at the Justice Department.

However, three months earlier, on August 15, 2017, she had told Special Counsel investigators that Obama was the one who first told her about Flynn’s calls with Kislyak during a White House meeting in early January.

To compare, this is her exchange with Heck on November 3, 2017, according a recently-released transcript (emphasis added):

MR. HECK: So then more recently, however, than the summer, as I recall — correct me if I’m wrong — I would ask you the same question about when and how you first became aware that General Flynn had been in contact with the Russian Ambassador?

MS. YATES: I learned that in early January of this year from both the FBI and the National Security Division.

This is what she told Mueller’s team three months earlier, on August 15, 2017, according to a recently-released FBI summary of her interview (emphasis added):

Yates first learned of the December 2016 calls between (LTG Michael Flynn and [Russian Ambassador to the United States, Sergey Kislyak on January 5, 2017, while in the Oval Office. Yates, along with then-FBI Director James Comey, then-CIA Director John Brennan, and then-Director of National Intelligence James Clapper, were at the White House to brief members of the Obama Administration on the classified Intelligence Community Assessment on Russian Activities in Recent U.S. Elections. President Obama was joined by his National Security Advisor Susan Rice, and others from the National Security Council. After the briefing, Obama dismissed the group but asked Yates and Comey to stay behind. Obama started by saying he had “learned of the information about Flynn” and his conversation with Kislyak about sanctions. Obama specified that he did not want any additional information on the matter, but was seeking information on whether the White House should be treating Flynn any differently, given the information. At that point, Yates had no idea what the President was talking about, but figured it out based on the conversation.

It was not clear to Yates from where the President first received the information. Yates did not recall Comey’s response to the President’s question about how to treat Flynn. She was so surprised by the information she was hearing that she was having a hard time processing it and listening to the conversation at the same time.

In her interview with Congress, Yates also tried to avoid answering whether Flynn’s calls with Kislyak were discussed in the presence of Obama. She turned to her lawyer David O’Neil to intervene at first, and when pressed, said she was getting “a little uncomfortable.”

MR. TURNER: ls it correct that at that meeting that’s when you learned of the Flynn/Kislyak conversation?

MR. TURNER: Others have answered this question. This is — so I’m merely asking her if she agrees or disagrees with the characterization about this.

MS. YATES: — and I could be wrong about this, that John Brennan was at that meeting as well.

MR. TURNER: Okay. And that meeting, it was — my understanding is that it was discussed, and that at that meeting it was discussed that Mr. Clapper had informed the President and the administration of the issue of the Flynn/Kislyak conversation. You don’t recall?

MS. YATES: This is where I get a little uncomfortable because the President was there and the instructions that we got from this White House.

MR. TURNER: Obviously, I’m asking you things that others have testified about. It’s not an issue of executive privilege; it’s asking your recollection.

MR. O’NEIL: Well, to the extent that there are conversations with any President here, those would be subject to the presidential communications privilege, which we —

MR. TURNER: Unless it’s already been subject matter of testimony before us, which, obviously, is why I’m asking you the question. So do you recall at that meeting Mr. Clapper — the discussion of Mr. Clapper informing the administration of the concerns of the Flynn/Kislyak conversation?

MR. O’NEIL: So I’m not sure that just because others have testified about it that we’re not bound by the instruction that this — it’s the current administration has provided, which is that conversations with either the former President or the current President are not ones that should be discussed.