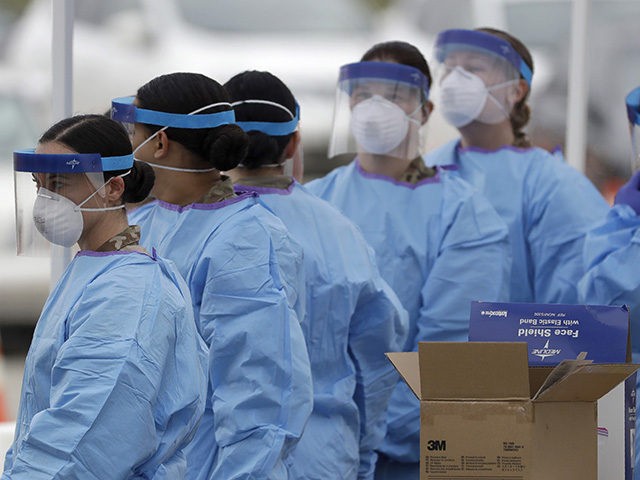 There are tons of reports about people stealing medical masks, but the media only turned it into something controversial after President Trump brought it up.

During his Sunday night press briefing, Trump remarked on the incredible news that at some hospitals, orders for masks have jumped from 10,000 and 20,000 to 300,000.

“I think people should check that because there’s something going on. I don’t think it’s hoarding. I think it’s maybe worse than hoarding,” he said. “Check it out. I don’t know. I think that’s for other people to figure out.”

“Are they going out the back door?” he added.

If these numbers are correct, and during the briefing, a mask manufacturer backed them up, something is obviously amiss. But because the national political media are unserious and pretty much useless, instead of looking into what could be a growing black market at the expense of human lives, they decided to freak out like the babies they are.

The far-left MSN harrumphed: “President Trump … insinuated that staff may be stealing face masks amid the coronavirus pandemic.”

“Today’s conspiracy mongering from our President is among the most reckless and ignorant moves he has made during the crisis, and there have been many,” China Joe’s statement read.

In the vernacular of the times, Trump has the receipts…

To begin with, and without the media freaking out even a little bit, New York’s very own governor, one Andrew Cuomo, said the exact same thing more than three weeks ago:

As fear over the new coronavirus in New York spreads faster than the outbreak, people have started to steal masks and other medical equipment from local hospitals,  Gov. Andrew Cuomo told reporters Friday.

“Not just people taking a couple or three, I mean just actual thefts of those products,” Cuomo said at a press conference from the state capital in Albany. “I’ve asked the state police to do an investigation, look at places that are selling masks, medical equipment, protective wear, feeding the anxiety.”

There are also all kinds of new reports, including in the far-left New York Times, about masks and other equipment slipping out the back door…

Hospitals across the Triangle say thieves are stealing masks, gloves and hand sanitizer by the box due to anxiety over the nationwide shortage of medical supplies.

Across UNC Health in Raleigh and Chapel Hill, the problem goes beyond grabbing supplies off a shelf. Some patients and visitors have brought in empty containers and filled them from sanitizer dispensers mounted on the walls, spokesman Alan Wolf said.

New York Gov. Andrew Cuomo said Friday that his administration had directed state police to investigate cases of the theft of masks and other equipment from hospitals and medical facilities, putting healthcare workers at risk.

Are we no longer allowed to use our brains?

Of course, there’s a black market for this stuff. Things that used to look as disposable as a straw or plastic fork, now look like gold, and, of course, I’m talking about hand sanitizer, gloves, masks… The temptation is everywhere, and it is patently absurd for the media — especially with all this reporting to back Trump up — to pretend this is not an issue worth looking into, especially when a hospital that can only handle so many patients blows up its order times ten.