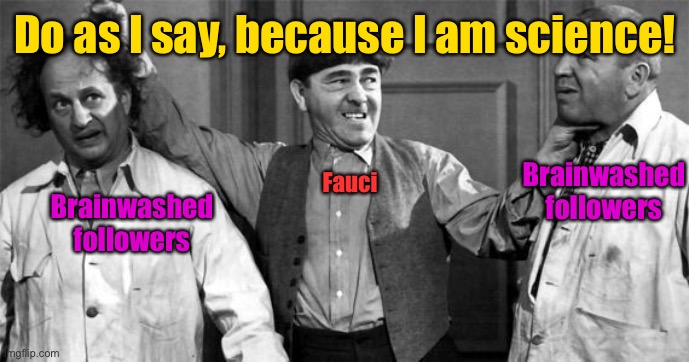 Fauci is an unelected technocrat who has distorted science and facts in order to exercise authoritarian control over millions of Americans.

He lives in a liberal world where his smug “I REPRESENT science” attitude is praised.

Here are the facts:
(1) On May 11, Fauci testified before a Senate Committee that “the NIH has not ever and does not now fund gain-of-function research in the Wuhan Institute of Virology.”
(2) On October 20, NIH wrote they funded an experiment at the Wuhan lab testing if “spike proteins from naturally occurring bat coronaviruses circulating in China were capable of binding to the human ACE2 receptor in a mouse model.” That is gain of function research.
(3) Fauci’s statement and the NIH’s October 20 letter cannot both be true. The statements are directly contradictory.

(4) 18 USC 1001 makes it felony, punishable by up to 5 years in prison, to lie to Congress.
No amount of ad hominem insults parroting Democrat talking points will get Fauci out of this contradiction.

Fauci either needs to address the substance—in detail, with specific factual corroboration—or DOJ should consider prosecuting him for making false statements to Congress.

The absolute hubris of someone claiming THEY represent science. It’s astounding and alarming that a public health bureaucrat would even think to claim such a thing, especially one who has worked so hard to ignore the science of natural immunity. https://t.co/rcDezphVRR