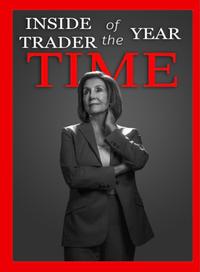 As tensions soar in Eastern Europe as a result of Russian President Vladimir Putin ordering a “special military excursion” into the sovereign nation of Ukraine, house members have been hosting their own excursions into the depths of their complex stock portfolios.

Late Wednesday night, Speaker of the House Nancy Pelosi purchased a massive quantity of Lockheed Martin shares: nearly 125,000 across five trades, or around $50,000,000 worth, just before news of Putin’s invasion became public.

Lockheed Martin, among other companies, is a major supplier of arms to both the United States and other nations around the world, including Ukraine. Roughly 650 tons of armaments and ammunition has found their way into the Ukrainian region of Donbas, which Russian forces currently occupy, via U.S. shipments.